Is Cardinal Financial Corporation (CFNL) A Good Stock To Buy?

Cardinal Financial Corporation (NASDAQ:CFNL) investors should pay attention to an increase in hedge fund sentiment recently. Of the 742 elite funds we track, 11 funds owned $70.08 million of Cardinal Financial Corporation (NASDAQ:CFNL) and accounted for 4.70% of the float on September 30, versus 9 funds and $33.16 million respectively on June 30. At the end of this article we will also compare CFNL to other stocks including TriMas Corp (NASDAQ:TRS), Transocean Partners LLC (NYSE:RIGP), and Insys Therapeutics Inc (NASDAQ:INSY) to get a better sense of its popularity.

Keeping this in mind, we’re going to take a look at the new action encompassing Cardinal Financial Corporation (NASDAQ:CFNL).

What have hedge funds been doing with Cardinal Financial Corporation (NASDAQ:CFNL)?

At the end of the third quarter, a total of 11 of the hedge funds tracked by Insider Monkey held long positions in this stock, a change of 22% from one quarter earlier. By comparison, 12 hedge funds held shares or bullish call options in CFNL heading into this year. So, let’s check out which hedge funds were among the top holders of the stock and which hedge funds were making big moves. 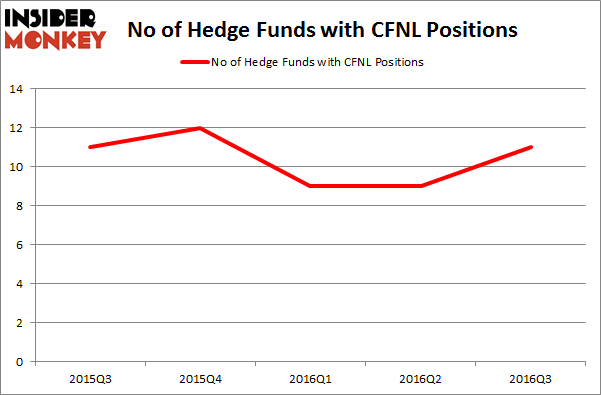 According to Insider Monkey’s hedge fund database, Cardinal Capital, led by Amy Minella, holds the most valuable position in Cardinal Financial Corporation (NASDAQ:CFNL). Cardinal Capital has a $30.6 million position in the stock, comprising 1.4% of its 13F portfolio. The second largest stake is held by Magnetar Capital, led by Alec Litowitz and Ross Laser, which holds a $21.8 million position; the fund has 0.3% of its 13F portfolio invested in the stock. Some other peers with similar optimism consist of Israel Englander’s Millennium Management, one of the 10 largest hedge funds in the world, Jim Simons’s Renaissance Technologies and John Overdeck and David Siegel’s Two Sigma Advisors. We should note that none of these hedge funds are among our list of the 100 best performing hedge funds which is based on the performance of their 13F long positions in non-microcap stocks.