Canadian Natural Resources Limited (NYSE:CNQ) shares haven’t seen a lot of action during the third quarter. Overall, hedge fund sentiment was unchanged. The stock was in 23 hedge funds’ portfolios at the end of the third quarter of 2018. At the end of this article we will also compare CNQ to other stocks including Kimberly Clark Corporation (NYSE:KMB), Royal Bank of Scotland Group plc (NYSE:RBS), and Kinder Morgan Inc (NYSE:KMI) to get a better sense of its popularity.

Today there are tons of methods market participants employ to size up publicly traded companies. A couple of the most useful methods are hedge fund and insider trading interest. Our experts have shown that, historically, those who follow the best picks of the best fund managers can beat the broader indices by a very impressive margin (see the details here).

What have hedge funds been doing with Canadian Natural Resources Limited (NYSE:CNQ)? 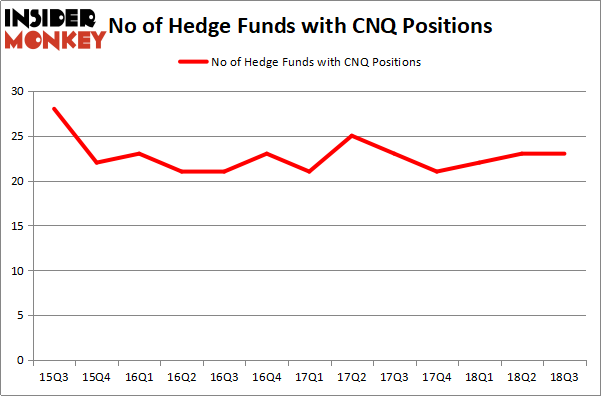 More specifically, Polar Capital was the largest shareholder of Canadian Natural Resources Limited (NYSE:CNQ), with a stake worth $124.5 million reported as of the end of September. Trailing Polar Capital was GMT Capital, which amassed a stake valued at $103.2 million. AQR Capital Management, Balyasny Asset Management, and Millennium Management were also very fond of the stock, giving the stock large weights in their portfolios.

Judging by the fact that Canadian Natural Resources Limited (NYSE:CNQ) has witnessed declining sentiment from the smart money, it’s easy to see that there is a sect of funds that elected to cut their entire stakes by the end of the third quarter. Intriguingly, Robert Pohly’s Samlyn Capital said goodbye to the largest position of the 700 funds watched by Insider Monkey, valued at close to $36.4 million in call options. George Soros’s fund, Soros Fund Management, also sold off its call options, about $36.1 million worth. These transactions are intriguing to say the least, as aggregate hedge fund interest stayed the same (this is a bearish signal in our experience).

As you can see these stocks had an average of 29 hedge funds with bullish positions and the average amount invested in these stocks was $1.38 billion. That figure was $577 million in CNQ’s case. Kinder Morgan Inc (NYSE:KMI) is the most popular stock in this table. On the other hand Royal Bank of Scotland Group plc (NYSE:RBS) is the least popular one with only 6 bullish hedge fund positions. Canadian Natural Resources Limited (NYSE:CNQ) is not the least popular stock in this group but hedge fund interest is still below average. This is a slightly negative signal and we’d rather spend our time researching stocks that hedge funds are piling on. In this regard KMI might be a better candidate to consider a long position.