Is Calix Inc (CALX) Going to Burn These Hedge Funds?

During the first half of the fourth quarter the Russell 2000 ETF (IWM) lagged the larger S&P 500 ETF (SPY) by about 4 percentage points as investors worried over the possible ramifications of rising interest rates. The hedge funds and institutional investors we track typically invest more in smaller-cap stocks than an average investor (i.e. only 298 S&P 500 constituents were among the 500 most popular stocks among hedge funds), and we have seen data that shows those funds paring back their overall exposure. Those funds cutting positions in small-caps is one reason why volatility has increased. In the following paragraphs, we take a closer look at what hedge funds and prominent investors think of Calix Inc (NYSE:CALX) and see how the stock is affected by the recent hedge fund activity.

Hedge fund interest in Calix Inc (NYSE:CALX) shares was flat at the end of last quarter. This is usually a negative indicator. At the end of this article we will also compare CALX to other stocks including Corbus Pharmaceuticals Holdings Inc (NASDAQ:CRBP), General Finance Corporation (NASDAQ:GFN), and Sentinel Energy Services Inc. (NASDAQ:STNL) to get a better sense of its popularity.

What does the smart money think about Calix Inc (NYSE:CALX)?

At the end of the third quarter, a total of 12 of the hedge funds tracked by Insider Monkey were long this stock, no change from the second quarter of 2018. By comparison, 12 hedge funds held shares or bullish call options in CALX heading into this year. With hedge funds’ positions undergoing their usual ebb and flow, there exists an “upper tier” of key hedge fund managers who were adding to their holdings significantly (or already accumulated large positions). 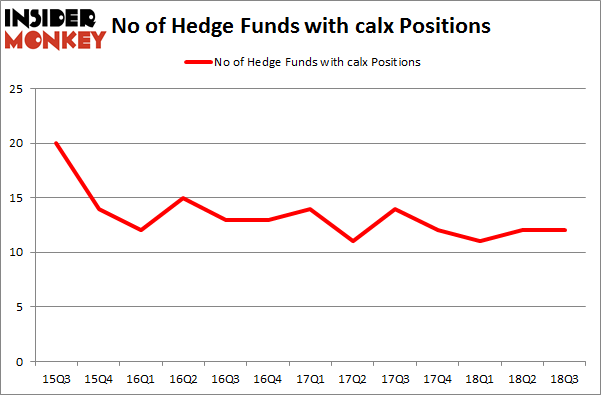 More specifically, Nokomis Capital was the largest shareholder of Calix Inc (NYSE:CALX), with a stake worth $31.4 million reported as of the end of September. Trailing Nokomis Capital was Renaissance Technologies, which amassed a stake valued at $22 million. Voce Capital, D E Shaw, and Arrowstreet Capital were also very fond of the stock, giving the stock large weights in their portfolios.

Because Calix Inc (NYSE:CALX) has faced bearish sentiment from the smart money, we can see that there were a few money managers who were dropping their entire stakes last quarter. At the top of the heap, Israel Englander’s Millennium Management sold off the largest investment of the “upper crust” of funds followed by Insider Monkey, valued at an estimated $1.6 million in stock. Dmitry Balyasny’s fund, Balyasny Asset Management, also dumped its stock, about $0.2 million worth. These bearish behaviors are intriguing to say the least, as total hedge fund interest stayed the same (this is a bearish signal in our experience).

As you can see these stocks had an average of 11 hedge funds with bullish positions and the average amount invested in these stocks was $57 million. That figure was $78 million in CALX’s case. Superior Industries International Inc. (NYSE:SUP) is the most popular stock in this table. On the other hand Corbus Pharmaceuticals Holdings Inc (NASDAQ:CRBP) is the least popular one with only 5 bullish hedge fund positions. Calix Inc (NYSE:CALX) is not the most popular stock in this group but hedge fund interest is still above average. This is a slightly positive signal but we’d rather spend our time researching stocks that hedge funds are piling on. In this regard SUP might be a better candidate to consider a long position.