Insider Monkey has processed numerous 13F filings of hedge funds and famous investors to create an extensive database of hedge fund holdings. The 13F filings show the hedge funds and investors’ positions as of the end of the third quarter. You can find write-ups about an individual hedge fund’s trades on numerous financial news websites. However, in this article we will take a look at their collective moves and analyze what the smart money thinks of California Resources Corp (NYSE:CRC) based on that data.

California Resources Corp (NYSE:CRC) was in 22 hedge funds’ portfolios at the end of September. CRC has experienced a small decrease in activity from the world’s largest hedge funds of late, as there were 23 hedge funds in our database with CRC positions at the end of the previous quarter. The number of shareholders with long positions in the company was far from enough for it to be considered as one of the 30 most popular stocks among hedge funds in Q3 of 2018. In spite of this, we would still like to analyze the stock further and check out how popular the company is when compared to similarly valued businesses.

While researching about California Resources Corp (NYSE:CRC) furthermore, we stumbled upon JDP Capital Management’s Partnership & Performance Update, in which the company was analyzed. We bring you that part of the report.

“California Resources was a busted spin-out of Occidental Petroleum Corp (OXY0 days before the 2014 oil crash and the only US E&P to remain cash flow positive throughout the downturn. CRC is the largest oil and gas producer in CA with critical infrastructure to the world’s 5th largest economy. Due to regulatory constraints CRC competes with South America and Canadian tar sands and not mid-west shale of Gulf of Mexico (Brent vs. WTI).

Why it’s worth more

At Q3’s end, a total of 22 of the hedge funds tracked by Insider Monkey were long this stock, a change of -4% from the second quarter of 2018. The graph below displays the number of hedge funds with bullish position in CRC over the last 13 quarters. With hedge funds’ sentiment swirling, there exists a few noteworthy hedge fund managers who were increasing their holdings considerably (or already accumulated large positions). 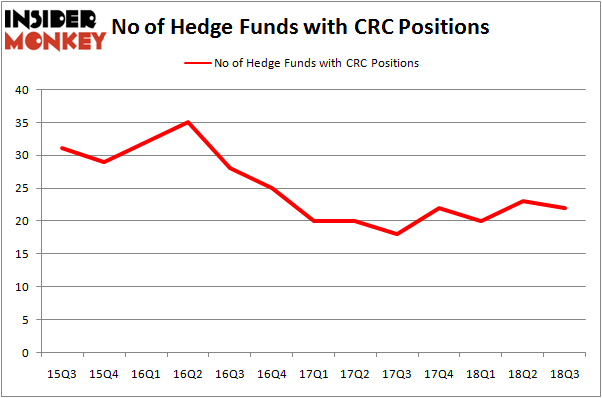 The largest stake in California Resources Corp (NYSE:CRC) was held by D E Shaw, which reported holding $97.2 million worth of stock at the end of September. It was followed by Cyrus Capital Partners with a $70.5 million position. Other investors bullish on the company included Crescent Park Management, Masters Capital Management, and Elm Ridge Capital.

Judging by the fact that California Resources Corp (NYSE:CRC) has witnessed falling interest from the entirety of the hedge funds we track, it’s safe to say that there lies a certain “tier” of fund managers who sold off their positions entirely last quarter. At the top of the heap, Vince Maddi and Shawn Brennan’s SIR Capital Management dropped the largest stake of the “upper crust” of funds watched by Insider Monkey, totaling close to $18.4 million in stock, and Todd J. Kantor’s Encompass Capital Advisors was right behind this move, as the fund dropped about $14.7 million worth. These moves are intriguing to say the least, as total hedge fund interest fell by 1 funds last quarter.

As you can see these stocks had an average of 15 hedge funds with bullish positions and the average amount invested in these stocks was $178 million. That figure was $414 million in CRC’s case. Cal-Maine Foods Inc (NASDAQ:CALM) is the most popular stock in this table. On the other hand Main Street Capital Corporation (NYSE:MAIN) is the least popular one with only 8 bullish hedge fund positions. Compared to these stocks California Resources Corp (NYSE:CRC) is more popular among hedge funds. Considering that hedge funds are fond of this stock in relation to its market cap peers, it may be a good idea to analyze it in detail and potentially include it in your portfolio.

Hedge Funds Are Buying Simon Property Group, Inc (NYSE:SPG)
Monthly Newsletter Strategy
Download a free copy of our newsletter and see the details inside!
Hedge Fund Resource Center
Related News
Financial Markets Snapshot: Today’s 35 Major Stories from the World of Finance California Resources Corp (CRC): Falling Out of Favor With Smart Money Here’s Why Traders Are Piling Into These Five Stocks Callaway Golf, WMIH Rank Among The 5 Most Popular Micro-Cap Stocks Among Hedge Funds Most Popular Energy Stocks Under $5 Why Are These 5 Stocks Making Moves Today? Why These Five Stocks Are Deep in Red on Tuesday? 5 Most Socially Responsible Companies in America 5 Ways You Can Eliminate Credit Card Debt 10 Easiest Road Test Sites in NY and NJ
Billionaire Hedge Funds