Is Cable One Inc (NYSE:CABO) a good stock to buy right now? We at Insider Monkey like to examine what billionaires and hedge funds think of a company before doing days of research on it. Given their 2 and 20 payment structure, hedge funds have more resources than the average investor. The funds have access to expert networks and get tips from industry insiders. They also have numerous Ivy League graduates and MBAs. Like everyone else, hedge funds perform miserably at times, but their consensus picks have historically outperformed the market after risk adjustments.

Cable One Inc (NYSE:CABO) shares haven’t seen a lot of action during the third quarter. Overall, hedge fund sentiment was unchanged. The stock was in 18 hedge funds’ portfolios at the end of September. The level and the change in hedge fund popularity aren’t the only variables you need to analyze to decipher hedge funds’ perspectives. A stock may witness a boost in popularity but it may still be less popular than similarly priced stocks. That’s why at the end of this article we will examine companies such as Empire State Realty Trust Inc (NYSE:ESRT), MDU Resources Group Inc (NYSE:MDU), and Pivotal Software, Inc. (NYSE:PVTL) to gather more data points.

How are hedge funds trading Cable One Inc (NYSE:CABO)?

At Q3’s end, a total of 18 of the hedge funds tracked by Insider Monkey were bullish on this stock, representing no change from one quarter earlier. The graph below displays the number of hedge funds with bullish position in CABO over the last 13 quarters. With hedge funds’ sentiment swirling, there exists a few key hedge fund managers who were increasing their stakes substantially (or already accumulated large positions). 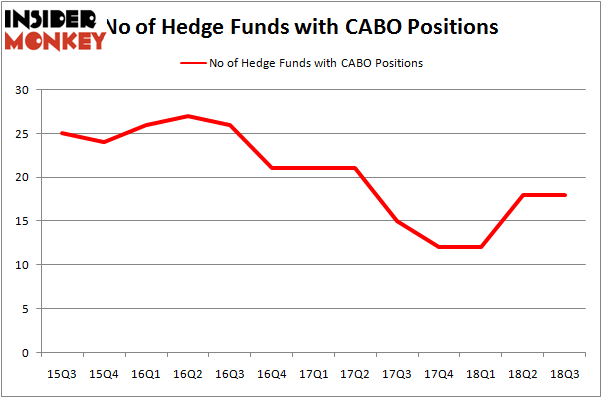 More specifically, SQ Advisors was the largest shareholder of Cable One Inc (NYSE:CABO), with a stake worth $315.5 million reported as of the end of September. Trailing SQ Advisors was Renaissance Technologies, which amassed a stake valued at $195.9 million. Wallace Capital Management, Balyasny Asset Management, and Citadel Investment Group were also very fond of the stock, giving the stock large weights in their portfolios.

Due to the fact that Cable One Inc (NYSE:CABO) has experienced declining sentiment from the aggregate hedge fund industry, it’s safe to say that there lies a certain “tier” of fund managers that decided to sell off their positions entirely in the third quarter. Intriguingly, Matthew Tewksbury’s Stevens Capital Management said goodbye to the biggest position of the “upper crust” of funds watched by Insider Monkey, worth about $0.8 million in stock, and Michael Platt and William Reeves’s BlueCrest Capital Mgmt. was right behind this move, as the fund cut about $0.4 million worth. These transactions are interesting, as total hedge fund interest stayed the same (this is a bearish signal in our experience).

As you can see these stocks had an average of 17.5 hedge funds with bullish positions and the average amount invested in these stocks was $245 million. That figure was $629 million in CABO’s case. Stericycle Inc (NASDAQ:SRCL) is the most popular stock in this table. On the other hand Empire State Realty Trust Inc (NYSE:ESRT) is the least popular one with only 13 bullish hedge fund positions. Cable One Inc (NYSE:CABO) is not the most popular stock in this group but hedge fund interest is still above average. This is a slightly positive signal but we’d rather spend our time researching stocks that hedge funds are piling on. In this regard SRCL might be a better candidate to consider a long position.

Should You Buy Genomic Health, Inc. (GHDX)?
Monthly Newsletter Strategy
Download a free copy of our newsletter and see the details inside!
Hedge Fund Resource Center
Related News
Cable One Inc (CABO): Are Hedge Funds Right About This Stock? 11 Countries With The Worst Modern Music In The World The Top 5 Robo Advisor Apps of 2018 Five Reasons You Need a Day-Trading Mentor
Billionaire Hedge Funds