Is Buckeye Partners, L.P. (BPL) A Good Stock To Buy?

The Russell 2000 ETF (IWM) has shot up by 38% since hitting a 52-week low on February 11, easily outdistancing the S&P 500 ETF (SPY)’s 19% gains during that time. Nor is the small-cap rally likely to be over. History shows that after periods of 15% or greater declines in the Russell 2000 ETF, it has responded with average gains of nearly 100%. In fact, only once did the rebound run come in below 60% gains. It’s no wonder then that hedge funds appear to be aggressively putting their money back into small-cap stocks. In this article, we’ll look at their Q3 trading habits in regards to Buckeye Partners, L.P. (NYSE:BPL) .

Is Buckeye Partners, L.P. (NYSE:BPL) a buy here? The smart money is really actually taking a pessimistic view. The number of long hedge fund investments suffered a reduction of 1 recently. BPL was in 13 hedge funds’ portfolios at the end of September. There were 14 hedge funds in our database with BPL positions at the end of the previous quarter. The level and the change in hedge fund popularity aren’t the only variables you need to analyze to decipher hedge funds’ perspectives. A stock may witness a boost in popularity but it may still be less popular than similarly priced stocks. That’s why at the end of this article we will examine companies such as Expeditors International of Washington (NASDAQ:EXPD), Mobileye NV (NYSE:MBLY), and Cna Financial Corp (NYSE:CNA) to gather more data points.

What have hedge funds been doing with Buckeye Partners, L.P. (NYSE:BPL)?

At the end of the third quarter, a total of 13 of the hedge funds tracked by Insider Monkey were bullish on this stock, a drop of 7% from the second quarter of 2016. Below, you can check out the change in hedge fund sentiment towards BPL over the last 5 quarters. With hedgies’ sentiment swirling, there exists a select group of key hedge fund managers who were increasing their stakes significantly (or already accumulated large positions). 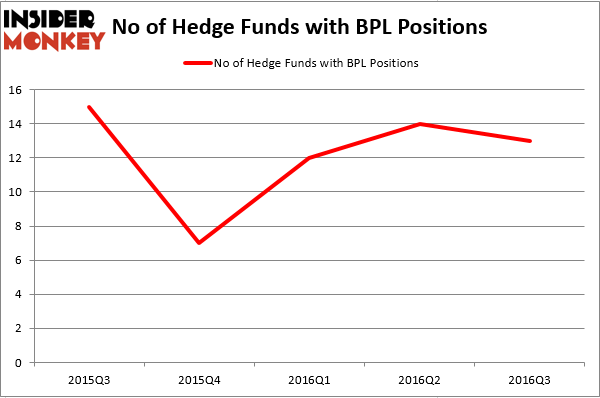 According to Insider Monkey’s hedge fund database, Renaissance Technologies, one of the largest hedge funds in the world, has the biggest position in Buckeye Partners, L.P. (NYSE:BPL), worth close to $23.5 million, corresponding to. The second largest stake is held by Wexford Capital, led by Charles Davidson, which holds a $12.3 million position; the fund has 2% of its 13F portfolio invested in the stock. Other peers that are bullish include Paul Marshall and Ian Wace’s Marshall Wace LLP, Israel Englander’s Millennium Management and Matthew Hulsizer’s PEAK6 Capital Management. We should note that none of these hedge funds are among our list of the 100 best performing hedge funds which is based on the performance of their 13F long positions in non-microcap stocks.