Is Brinker International, Inc. (EAT) A Good Stock To Buy?

Brinker International, Inc. (NYSE:EAT) was in 26 hedge funds’ portfolios at the end of September. EAT investors should pay attention to an increase in enthusiasm from smart money in recent months. There were 20 hedge funds in our database with EAT positions at the end of the previous quarter. Our calculations also showed that EAT isn’t among the 30 most popular stocks among hedge funds.

Heading into the fourth quarter of 2018, a total of 26 of the hedge funds tracked by Insider Monkey were long this stock, a change of 30% from the second quarter of 2018. On the other hand, there were a total of 19 hedge funds with a bullish position in EAT at the beginning of this year. With hedge funds’ capital changing hands, there exists an “upper tier” of key hedge fund managers who were upping their holdings substantially (or already accumulated large positions). 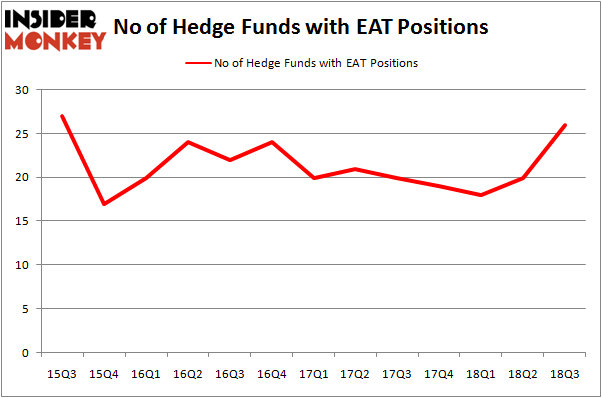 More specifically, Interval Partners was the largest shareholder of Brinker International, Inc. (NYSE:EAT), with a stake worth $24.7 million reported as of the end of September. Trailing Interval Partners was Renaissance Technologies, which amassed a stake valued at $24 million. Two Sigma Advisors, AQR Capital Management, and Arrowstreet Capital were also very fond of the stock, giving the stock large weights in their portfolios.

Now, key hedge funds have jumped into Brinker International, Inc. (NYSE:EAT) headfirst. Interval Partners, managed by Gregg Moskowitz, assembled the most outsized position in Brinker International, Inc. (NYSE:EAT). Interval Partners had $24.7 million invested in the company at the end of the quarter. Peter Rathjens, Bruce Clarke and John Campbell’s Arrowstreet Capital also made a $12.7 million investment in the stock during the quarter. The other funds with new positions in the stock are Robert Pohly’s Samlyn Capital, Lee Ainslie’s Maverick Capital, and Steven Boyd’s Armistice Capital.

As you can see these stocks had an average of 17 hedge funds with bullish positions and the average amount invested in these stocks was $201 million. That figure was $197 million in EAT’s case. Orion Engineered Carbons SA (NYSE:OEC) is the most popular stock in this table. On the other hand Hilltop Holdings Inc. (NYSE:HTH) is the least popular one with only 14 bullish hedge fund positions. Compared to these stocks Brinker International, Inc. (NYSE:EAT) is more popular among hedge funds. Considering that hedge funds are fond of this stock in relation to its market cap peers, it may be a good idea to analyze it in detail and potentially include it in your portfolio.