Is Boston Properties, Inc. (BXP) A Good Stock To Buy?

We at Insider Monkey have gone over 700 13F filings that hedge funds and prominent investors are required to file by the SEC. The 13F filings show the funds’ and investors’ portfolio positions as of September 30th. In this article we look at what those investors think of Boston Properties, Inc. (NYSE:BXP).

Boston Properties, Inc. (NYSE:BXP) was in 17 hedge funds’ portfolios at the end of September. BXP has seen an increase in enthusiasm from smart money in recent months. There were 11 hedge funds in our database with BXP positions at the end of the previous quarter. Our calculations also showed that BXP isn’t among the 30 most popular stocks among hedge funds.

What have hedge funds been doing with Boston Properties, Inc. (NYSE:BXP)? 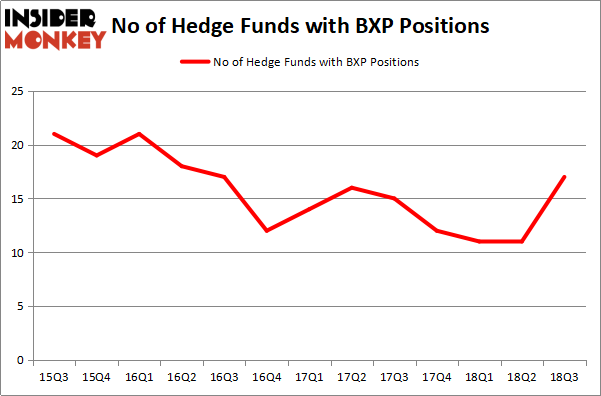 As industrywide interest jumped, some big names were leading the bulls’ herd. Millennium Management, managed by Israel Englander, initiated the most outsized position in Boston Properties, Inc. (NYSE:BXP). Millennium Management had $38.9 million invested in the company at the end of the quarter. Matthew Tewksbury’s Stevens Capital Management also made a $9.4 million investment in the stock during the quarter. The other funds with new positions in the stock are Jim Simons’s Renaissance Technologies, David Costen Haley’s HBK Investments, and Paul Tudor Jones’s Tudor Investment Corp.

As you can see these stocks had an average of 28 hedge funds with bullish positions and the average amount invested in these stocks was $1.35 million. That figure was $348 million in BXP’s case. Mylan N.V. (NASDAQ:MYL) is the most popular stock in this table. On the other hand Microchip Technology Incorporated (NASDAQ:MCHP) is the least popular one with only 23 bullish hedge fund positions. Compared to these stocks Boston Properties, Inc. (NYSE:BXP) is even less popular than MCHP. Considering that hedge funds aren’t fond of this stock in relation to other companies analyzed in this article, it may be a good idea to analyze it in detail and understand why the smart money isn’t behind this stock. This isn’t necessarily bad news. Although it is possible that hedge funds may think the stock is overpriced and view the stock as a short candidate, they may not be very familiar with the bullish thesis. In either case more research is warranted.