Is BOK Financial Corporation (BOKF) A Good Stock To Buy?

Is BOK Financial Corporation (NASDAQ:BOKF) worth your attention right now? The smart money is taking an optimistic view. The number of long hedge fund bets advanced by 2 in recent months. Our calculations also showed that BOKF isn’t among the 30 most popular stocks among hedge funds. BOKF was in 16 hedge funds’ portfolios at the end of September. There were 14 hedge funds in our database with BOKF holdings at the end of the previous quarter.

What does the smart money think about BOK Financial Corporation (NASDAQ:BOKF)?

At the end of the third quarter, a total of 16 of the hedge funds tracked by Insider Monkey were long this stock, a change of 14% from the previous quarter. On the other hand, there were a total of 10 hedge funds with a bullish position in BOKF at the beginning of this year. With hedge funds’ sentiment swirling, there exists a few key hedge fund managers who were upping their stakes substantially (or already accumulated large positions). 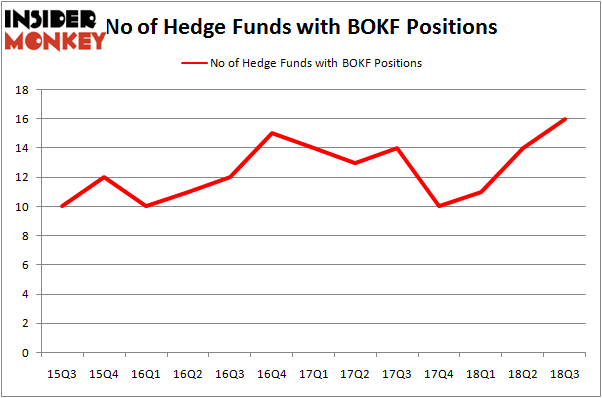 More specifically, Diamond Hill Capital was the largest shareholder of BOK Financial Corporation (NASDAQ:BOKF), with a stake worth $63.6 million reported as of the end of September. Trailing Diamond Hill Capital was Citadel Investment Group, which amassed a stake valued at $58.8 million. Ariel Investments, Royce & Associates, and Balyasny Asset Management were also very fond of the stock, giving the stock large weights in their portfolios.

As you can see these stocks had an average of 22.25 hedge funds with bullish positions and the average amount invested in these stocks was $598 million. That figure was $306 million in BOKF’s case. Acuity Brands, Inc. (NYSE:AYI) is the most popular stock in this table. On the other hand EQM Midstream Partners, LP (NYSE:EQM) is the least popular one with only 8 bullish hedge fund positions. BOK Financial Corporation (NASDAQ:BOKF) is not the least popular stock in this group but hedge fund interest is still below average. This is a slightly negative signal and we’d rather spend our time researching stocks that hedge funds are piling on. In this regard AYI might be a better candidate to consider a long position.