Does Boise Cascade Co (NYSE:BCC) represent a good buying opportunity at the moment? Let’s briefly check the hedge fund interest towards the company. Hedge fund firms constantly search out bright intellectuals and highly-experienced employees and throw away millions of dollars on research activities, so it is no wonder why they tend to generate millions in profits each year. It is also true that some hedge fund players fail unconceivably on some occasions, but their stock picks have been generating superior risk-adjusted returns on average over the years.

Is Boise Cascade Co (NYSE:BCC) a superb investment today? Prominent investors are becoming hopeful. The number of bullish hedge fund bets rose by 5 in recent months. Our calculations also showed that BCC isn’t among the 30 most popular stocks among hedge funds.

In the financial world there are numerous gauges market participants put to use to grade their stock investments. A pair of the most underrated gauges are hedge fund and insider trading moves. Our experts have shown that, historically, those who follow the top picks of the top hedge fund managers can beat the market by a healthy amount (see the details here).

What does the smart money think about Boise Cascade Co (NYSE:BCC)?

At the end of the third quarter, a total of 22 of the hedge funds tracked by Insider Monkey held long positions in this stock, a change of 29% from the previous quarter. Below, you can check out the change in hedge fund sentiment towards BCC over the last 13 quarters. With hedgies’ capital changing hands, there exists a few notable hedge fund managers who were adding to their stakes substantially (or already accumulated large positions). 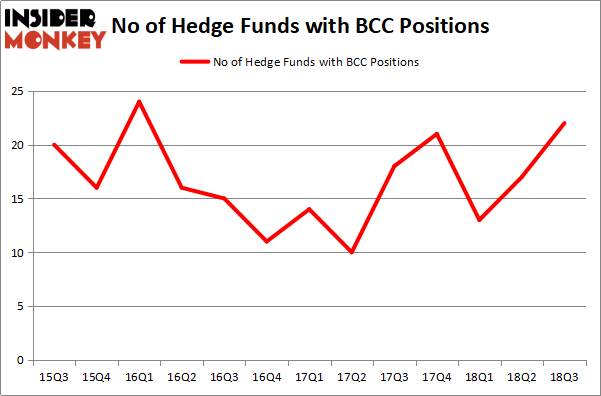 According to publicly available hedge fund and institutional investor holdings data compiled by Insider Monkey, AQR Capital Management, managed by Cliff Asness, holds the most valuable position in Boise Cascade Co (NYSE:BCC). AQR Capital Management has a $12.7 million position in the stock, comprising less than 0.1%% of its 13F portfolio. The second largest stake is held by Millennium Management, managed by Israel Englander, which holds a $9.9 million position; less than 0.1%% of its 13F portfolio is allocated to the stock. Remaining members of the smart money that are bullish comprise Jim Simons’s Renaissance Technologies, Noam Gottesman’s GLG Partners and John Overdeck and David Siegel’s Two Sigma Advisors.

As industrywide interest jumped, key hedge funds were leading the bulls’ herd. Renaissance Technologies, managed by Jim Simons, initiated the most valuable position in Boise Cascade Co (NYSE:BCC). Renaissance Technologies had $7 million invested in the company at the end of the quarter. Mike Vranos’s Ellington also initiated a $1 million position during the quarter. The other funds with new positions in the stock are Paul Tudor Jones’s Tudor Investment Corp, Brandon Haley’s Holocene Advisors, and Matthew Tewksbury’s Stevens Capital Management.

As you can see these stocks had an average of 18.5 hedge funds with bullish positions and the average amount invested in these stocks was $200 million. That figure was $54 million in BCC’s case. Warrior Met Coal, Inc. (NYSE:HCC) is the most popular stock in this table. On the other hand Caretrus REIT Inc (NASDAQ:CTRE) is the least popular one with only 11 bullish hedge fund positions. Boise Cascade Co (NYSE:BCC) is not the most popular stock in this group but hedge fund interest is still above average. This is a slightly positive signal but we’d rather spend our time researching stocks that hedge funds are piling on. In this regard HCC might be a better candidate to consider a long position.