Microsoft Corporation (NASDAQ:MSFT) may have just announced a $7.2 billion deal to acquire Nokia Corporation (ADR) (NYSE:NOK)‘s handset business and license the Finnish company’s patents, but that doesn’t mean the tech behemoth has closed its enormous checkbook just yet. 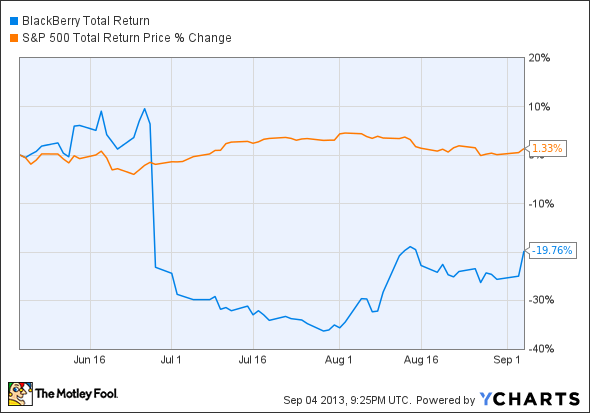 Back in June, the stock tanked more than 27% following the company’s dismal second-quarter earnings report, after which new-ish CEO Thorsten Heins responded at its annual shareholder meeting by begging for patience and effectively telling everyone they were measuring BlackBerry Ltd (NASDAQ:BBRY) by the wrong metrics.

Then, by the middle of August, the stock had already started to recover when BlackBerry’s board announced they were exploring “strategic alternatives” for the business, one of which most notably included putting the company up on the auction block for sale.

Lately, though, many investors have worried there simply might not be anyone interested in buying BlackBerry Ltd (NASDAQ:BBRY), especially as its BB10 operating system simply isn’t gaining the traction it needs to compete with more popular consumer-centric offerings from the likes of Apple Inc. (NASDAQ:AAPL) and Samsung.

Here’s why Micro-Berry could make sense

Late Wednesday, however, a Wall Street Journal report stated BlackBerry Ltd (NASDAQ:BBRY) has already “held preliminary talks with parties interested in buying part or all of the company,” and is now “aiming to complete a fast auction process that could be wrapped up by November.”

If you think that sounds like a tall order, you’d probably be right.

After all, BlackBerry’s market capitalization currently sits at just over $5.6 billion, so there aren’t many companies capable or willing to pull off a deal of this size, especially with no apparent signs of a near-term recovery for the struggling smartphone maker.

But that’s still less than Mr. Softy paid for Nokia Corporation (ADR) (NYSE:NOK), and regardless of whether BlackBerry’s devices and software are picking up steam in the ultra-competitive consumer segment, remember the company largely still exists because of its uncanny ability to cater to the needs of businesses, which require a solid enterprise security software solution.

And while Nokia Corporation (ADR) (NYSE:NOK)’s Lumia smartphones will undoubtedly do wonders to set up Microsoft Corporation (NASDAQ:MSFT) for a renewed push in the worldwide mobile space, where they’ve largely lagged behind the more popular smartphones from Apple Inc. (NASDAQ:AAPL) and Samsung, BlackBerry could serve as a nice supplementary prize to help Microsoft penetrate the also-lucrative enterprise segment.