Is BlackBerry Going to Burn These Hedge Funds?

While the market is driven by short-term sentiment influenced by uncertainty regarding the future of the interest rate environment in the US, declining oil prices and the trade war with China, many smart money investors are keeping their optimism regarding the current bull run, while still hedging many of their long positions. However, as we know, big investors usually buy stocks with strong fundamentals, which is why we believe we can profit from imitating them. In this article, we are going to take a look at the smart money sentiment surrounding BlackBerry Limited (NYSE:BB).

BlackBerry was in 18 hedge funds’ portfolios at the end of September. BB has experienced a decrease in hedge fund sentiment in recent months. There were 22 hedge funds in our database with BB holdings at the end of the previous quarter. Our calculations also showed that BB isn’t among the 30 most popular stocks among hedge funds.

While collecting data for our article, we came across Incandescent Capital’s Quarterly Report, in which the hedge fund provided a detailed account regarding the smartphone company. We bring you a snippet of that letter:

“For the past three and a half years, BlackBerry (BB) has been our largest position. In 2017, it was also our biggest winner, rising 62.1% and contributing ~12% to our overall gains. Given the importance of this investment in our overall portfolio, it’s appropriate to spend some time torehash the history and thesis for your analysis and judgment.

The rise and fall of BlackBerry, née Research In Motion, from 1984 to 2013 is well-chronicled: Canadian engineering wunderkinds invent two-way pager capable of pushing e-mail over-the-air, thus birthing the era of mobility. Wealth and fame follows, as does hubris, when they fail totake seriously the dual threat of iPhones and Androids. Responses to threat are too late and are botched (BlackBerry Storm, anyone?), market share declines rapidly, last ditch efforts to regainglory ends in smoldering rubble, and billions of dollars of shareholder value are vanquished.

Canadian insurance conglomerate Fairfax Financial enters the scene in late 2013, puts togethera consortium swapping a $1.25 billion life raft in exchange for convertible debt, and revamps thedirectors and officers of the company. The keys to the kingdom were handed to then-58 year oldJohn Chen, who in his career has already turned around two publicly traded tech companies, themost recent of which, Sybase, in the course of a dozen years, U-turned from a $400 million market cap also-ran to a $5.6 billion SAP buyout.”

What does the smart money think about BlackBerry Limited (NYSE:BB)?

At Q3’s end, a total of 18 of the hedge funds tracked by Insider Monkey held long positions in this stock, a change of -18% from one quarter earlier. Below, you can check out the change in hedge fund sentiment towards BB over the last 13 quarters. So, let’s find out which hedge funds were among the top holders of the stock and which hedge funds were making big moves. 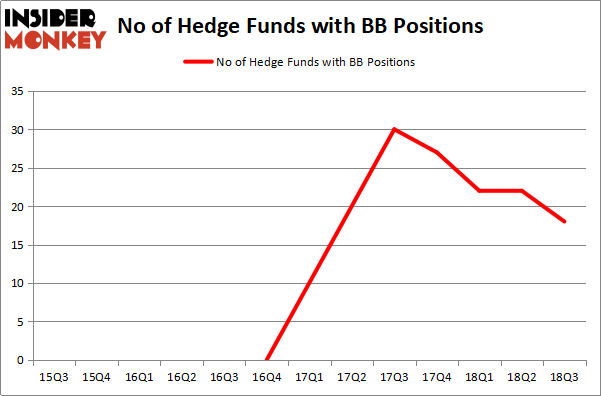 The largest stake in BlackBerry Limited (NYSE:BB) was held by Fairfax Financial Holdings, which reported holding $531.1 million worth of stock at the end of September. It was followed by Iridian Asset Management with a $151.3 million position. Other investors bullish on the company included AQR Capital Management, Kahn Brothers, and Citadel Investment Group.

Judging by the fact that BlackBerry Limited (NYSE:BB) has witnessed a decline in interest from hedge fund managers, it’s safe to say that there lies a certain “tier” of hedge funds who were dropping their entire stakes last quarter. Intriguingly, Dan Sobol and Lisa Hess’s SkyTop Capital Management cut the biggest investment of the “upper crust” of funds tracked by Insider Monkey, totaling close to $4.8 million in stock, and George Hall’s Clinton Group was right behind this move, as the fund sold off about $1.6 million worth. These moves are intriguing to say the least, as total hedge fund interest fell by 4 funds last quarter.

As you can see these stocks had an average of 14.25 hedge funds with bullish positions and the average amount invested in these stocks was $360 million. That figure was $932 million in BB’s case. Lincoln Electric Holdings, Inc. (NASDAQ:LECO) is the most popular stock in this table. On the other hand Grupo Aeroportuario del Pacífico, S.A.B. de C.V. (NYSE:PAC) is the least popular one with only 5 bullish hedge fund positions. BlackBerry Limited (NYSE:BB) is not the most popular stock in this group but hedge fund interest is still above average. This is a slightly positive signal but we’d rather spend our time researching stocks that hedge funds are piling on. In this regard LECO might be a better candidate to consider a long position.