Coronavirus is probably the #1 concern in investors’ minds right now. It should be. We estimate that COVID-19 will kill around 5 million people worldwide and there is a 3.3% probability that Donald Trump will die from the new coronavirus (read the details). In these volatile markets we scrutinize hedge fund filings to get a reading on which direction each stock might be going. With the first-quarter round of 13F filings behind us it is time to take a look at the stocks in which some of the best money managers in the world preferred to invest or sell heading into the second quarter. One of these stocks was Biogen Inc. (NASDAQ:BIIB).

Biogen Inc. (NASDAQ:BIIB) has experienced an increase in hedge fund sentiment recently. Our calculations also showed that BIIB isn’t among the 30 most popular stocks among hedge funds (click for Q4 rankings and see the video below for Q3 rankings).

We leave no stone unturned when looking for the next great investment idea. For example Europe is set to become the world’s largest cannabis market, so we check out this European marijuana stock pitch. We read hedge fund investor letters and listen to stock pitches at hedge fund conferences, and and go through short-term trade recommendations like this one. We even check out the recommendations of services with hard to believe track records. In January, we recommended a long position in one of the most shorted stocks in the market, and that stock returned more than 50% despite the large losses in the market since our recommendation. With all of this in mind let’s take a glance at the recent hedge fund action encompassing Biogen Inc. (NASDAQ:BIIB).

At Q4’s end, a total of 61 of the hedge funds tracked by Insider Monkey were long this stock, a change of 15% from one quarter earlier. On the other hand, there were a total of 57 hedge funds with a bullish position in BIIB a year ago. With the smart money’s sentiment swirling, there exists an “upper tier” of notable hedge fund managers who were boosting their stakes substantially (or already accumulated large positions). 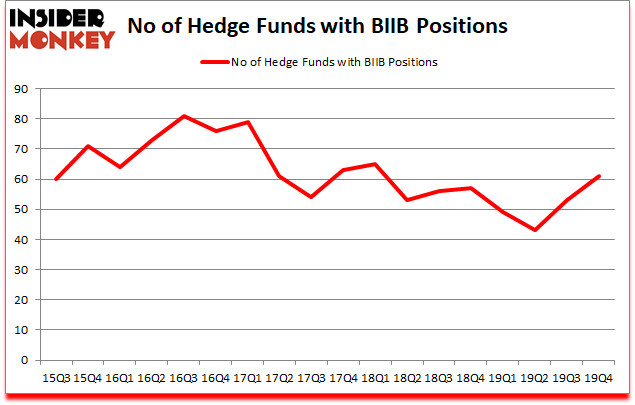 Now, key money managers were breaking ground themselves. Berkshire Hathaway, managed by Warren Buffett, established the most outsized position in Biogen Inc. (NASDAQ:BIIB). Berkshire Hathaway had $192.4 million invested in the company at the end of the quarter. Jeremy Green’s Redmile Group also initiated a $135.8 million position during the quarter. The other funds with new positions in the stock are Brandon Haley’s Holocene Advisors, Christopher James’s Partner Fund Management, and Phill Gross and Robert Atchinson’s Adage Capital Management.

As you can see these stocks had an average of 60 hedge funds with bullish positions and the average amount invested in these stocks was $3571 million. That figure was $5163 million in BIIB’s case. ServiceNow Inc (NYSE:NOW) is the most popular stock in this table. On the other hand Las Vegas Sands Corp. (NYSE:LVS) is the least popular one with only 37 bullish hedge fund positions. Biogen Inc. (NASDAQ:BIIB) is not the most popular stock in this group but hedge fund interest is still above average. Our calculations showed that top 20 most popular stocks among hedge funds returned 41.3% in 2019 and outperformed the S&P 500 ETF (SPY) by 10.1 percentage points. These stocks also gained 0.1% in 2020 through March 2nd and beat the market by 4.1 percentage points. Hedge funds were also right about betting on BIIB as the stock returned 10.5% during the first quarter (through March 2nd) and outperformed the market. Hedge funds were rewarded for their relative bullishness.