It seems that the masses and most of the financial media hate hedge funds and what they do, but why is this hatred of hedge funds so prominent? At the end of the day, these asset management firms do not gamble the hard-earned money of the people who are on the edge of poverty. Truth be told, most hedge fund managers and other smaller players within this industry are very smart and skilled investors. Of course, they may also make wrong bets in some instances, but no one knows what the future holds and how market participants will react to the bountiful news that floods in each day. The Standard and Poor’s 500 Index returned approximately 5.7% in the 12 months ending October 26 (including dividend payments). Conversely, hedge funds’ 30 preferred S&P 500 stocks (as of June 2018) generated a return of 15.1% during the same 12-month period, with 53% of these stock picks outperforming the broader market benchmark. Coincidence? It might happen to be so, but it is unlikely. Our research covering the last 18 years indicates that hedge funds’ stock picks generate superior risk-adjusted returns. That’s why we believe it isn’t a waste of time to check out hedge fund sentiment before you invest in a stock like BGC Partners, Inc. (NASDAQ:BGCP).

BGC Partners, Inc. (NASDAQ:BGCP) was in 27 hedge funds’ portfolios at the end of the third quarter of 2018. BGCP shareholders have witnessed an increase in support from the world’s most elite money managers recently. There were 24 hedge funds in our database with BGCP holdings at the end of the previous quarter. Our calculations also showed that BGCP isn’t among the 30 most popular stocks among hedge funds.

In today’s marketplace there are a multitude of formulas stock traders employ to evaluate stocks. Some of the most underrated formulas are hedge fund and insider trading signals. We have shown that, historically, those who follow the best picks of the best hedge fund managers can outperform the broader indices by a superb amount (see the details here).

At the end of the third quarter, a total of 27 of the hedge funds tracked by Insider Monkey were long this stock, a change of 13% from one quarter earlier. Below, you can check out the change in hedge fund sentiment towards BGCP over the last 13 quarters. So, let’s review which hedge funds were among the top holders of the stock and which hedge funds were making big moves. 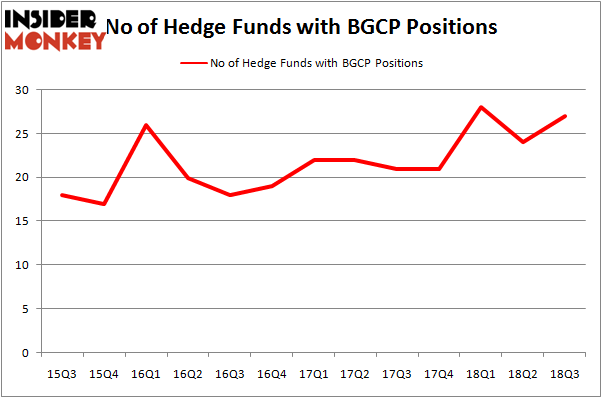 Of the funds tracked by Insider Monkey, Steve Cohen’s Point72 Asset Management has the number one position in BGC Partners, Inc. (NASDAQ:BGCP), worth close to $98.9 million, amounting to 0.4% of its total 13F portfolio. The second largest stake is held by Cardinal Capital, managed by Amy Minella, which holds a $91.7 million position; the fund has 2.9% of its 13F portfolio invested in the stock. Remaining members of the smart money that hold long positions include Cliff Asness’s AQR Capital Management, Jim Simons’s Renaissance Technologies and Paul Marshall and Ian Wace’s Marshall Wace LLP.

Consequently, some big names were breaking ground themselves. Marshall Wace LLP, managed by Paul Marshall and Ian Wace, established the most outsized position in BGC Partners, Inc. (NASDAQ:BGCP). Marshall Wace LLP had $35 million invested in the company at the end of the quarter. David Rosen’s Rubric Capital Management also initiated a $18.9 million position during the quarter. The other funds with new positions in the stock are Steve Pei’s Gratia Capital, Usman Waheed’s Strycker View Capital, and Matthew Hulsizer’s PEAK6 Capital Management.

Let’s check out hedge fund activity in other stocks – not necessarily in the same industry as BGC Partners, Inc. (NASDAQ:BGCP) but similarly valued. We will take a look at Cabot Corporation (NYSE:CBT), RLJ Lodging Trust (NYSE:RLJ), ALLETE Inc (NYSE:ALE), and Cree, Inc. (NASDAQ:CREE). This group of stocks’ market caps are similar to BGCP’s market cap.

View table here if you experience formatting issues.
As you can see these stocks had an average of 18.5 hedge funds with bullish positions and the average amount invested in these stocks was $231.48 billion. That figure was $477 million in BGCP’s case. Cabot Corporation (NYSE:CBT) is the most popular stock in this table. On the other hand Cree, Inc. (NASDAQ:CREE) is the least popular one with only 13 bullish hedge fund positions. Compared to these stocks BGC Partners, Inc. (NASDAQ:BGCP) is more popular among hedge funds. Considering that hedge funds are fond of this stock in relation to its market cap peers, it may be a good idea to analyze it in detail and potentially include it in your portfolio.