Is BEST Inc. (BSTI) A Good Stock To Buy?

The 700+ hedge funds and money managers tracked by Insider Monkey have already compiled and submitted their 13F filings for the second quarter, which unveil their equity positions as of September 30. We went through these filings, fixed typos and other more significant errors and identified the changes in hedge fund positions. Our extensive review of these public filings is finally over, so this article is set to reveal the smart money sentiment towards BEST Inc. (NYSE:BSTI).

BEST Inc. (NYSE:BSTI) has seen an increase in hedge fund sentiment in recent months. Our calculations also showed that bsti isn’t among the 30 most popular stocks among hedge funds.

At Q3’s end, a total of 12 of the hedge funds tracked by Insider Monkey held long positions in this stock, a change of 20% from the second quarter of 2018. Below, you can check out the change in hedge fund sentiment towards BSTI over the last 13 quarters. With hedgies’ capital changing hands, there exists a select group of noteworthy hedge fund managers who were adding to their stakes meaningfully (or already accumulated large positions). 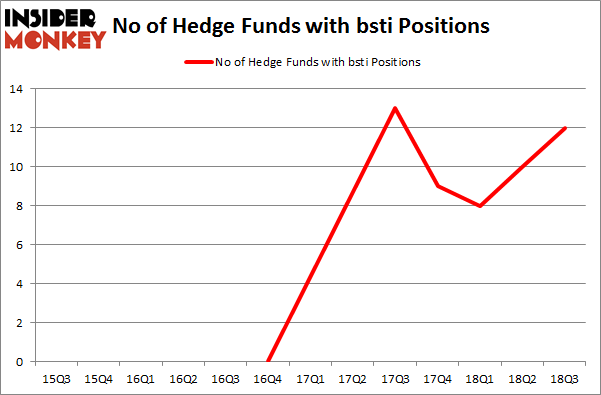 According to publicly available hedge fund and institutional investor holdings data compiled by Insider Monkey, Run Ye, Junji Takegami and Hoyon Hwang’s Tiger Pacific Capital has the number one position in BEST Inc. (NYSE:BSTI), worth close to $27.6 million, corresponding to 14.2% of its total 13F portfolio. Sitting at the No. 2 spot is NWI Management, managed by Hari Hariharan, which holds a $6.7 million position; the fund has 0.5% of its 13F portfolio invested in the stock. Other hedge funds and institutional investors that hold long positions include David Kowitz and Sheldon Kasowitz’s Indus Capital, Shashin Shah’s Think Investments and Ram Seshan Venkateswaran’s Vernier Capital.

As one would reasonably expect, specific money managers have jumped into BEST Inc. (NYSE:BSTI) headfirst. Dalton Investments, managed by Gifford Combs, created the largest position in BEST Inc. (NYSE:BSTI). Dalton Investments had $0.9 million invested in the company at the end of the quarter. D. E. Shaw’s D E Shaw also made a $0.6 million investment in the stock during the quarter. The other funds with new positions in the stock are Paul Tudor Jones’s Tudor Investment Corp and Matthew Tewksbury’s Stevens Capital Management.

As you can see these stocks had an average of 17.5 hedge funds with bullish positions and the average amount invested in these stocks was $188 million. That figure was $54 million in BSTI’s case. Callaway Golf Company (NYSE:ELY) is the most popular stock in this table. On the other hand Monro, Inc. (NASDAQ:MNRO) is the least popular one with only 10 bullish hedge fund positions. BEST Inc. (NYSE:BSTI) is not the least popular stock in this group but hedge fund interest is still below average. This is a slightly negative signal and we’d rather spend our time researching stocks that hedge funds are piling on. In this regard ELY might be a better candidate to consider a long position.