Best Buy Co., Inc. (NYSE:BBY)’s stock has recovered nicely in 2013 after a dreadful 2012. Better-than-expected results in the first quarter had a lot to do with that and the stock is now near a 52-week high.

If the market didn’t have such low expectations, the numbers would be less than impressive. First-quarter domestic revenue fell 9.6% to $7.98 billion and international revenue dropped 9.6% to $1.4 billion. 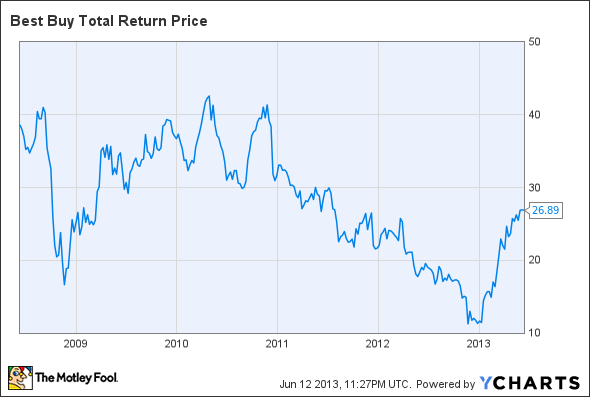 The only thing saving Best Buy from reporting a larger loss than $170 million was an effort to cut stores and operating expenses.

Is the strategy change working?
Best Buy Co., Inc. (NYSE:BBY) is slowly moving to a smaller store format with most of those being mobile-centric stores. The hope is that the company can sell everything from smartphones to tablets and the service agreements that go along with it.

If this sounds familiar, it’s because it is. Verizon Communications Inc. (NYSE:VZ), AT&T Inc. (NYSE:T), T-Mobile, and Apple Inc. (NASDAQ:AAPL) all have their own stores in similar locations where Best Buy Co., Inc. (NYSE:BBY) will be located. The advantage is that consumers can browse Apple, Samsung, Nokia Corporation (ADR) (NYSE:NOK), and other manufacturers and shop plans from Verizon Wireless to Virgin Mobile.

It’ll take some time to determine if the strategy is successful, but I can’t imagine how it will be. Best Buy Co., Inc. (NYSE:BBY) is competing with similar shops in malls and isn’t a destination in mobile. How is that a differentiator long term?

Can Best Buy offer something different?
As a consumer, the question I have is: Why should I go to Best Buy Co., Inc. (NYSE:BBY)? I buy music and movies online and I’m at Target Corporation (NYSE:TGT) regularly where I can pick up random electronics or even a TV. Amazon.com, Inc. (NASDAQ:AMZN) fills most specialized needs and appliances aren’t frequent purchases for me or most people. So, why would I go to Best Buy?

One answer might be for services that would be difficult to perform on your own. Geek Squad fixes computers, something I could never do on my own. Experts in entertainment systems could help design a television and sound system better than I could, but I’m still not paying more than I would online. Best Buy Co., Inc. (NYSE:BBY) isn’t leveraging the service side to draw in customers either, choosing smaller-format stores in mobile to fill sales. I’ve suggested in the past that Best Buy combine the next generation of electronics — including solar energy and electric vehicles — and the services around them as a differentiator, but that doesn’t appear to be the company’s plan.

When you look around retail, other companies have a differentiator over Best Buy. Target and Wal-Mart Stores, Inc. (NYSE:WMT) offer a variety of products including electronics and groceries for one-stop shopping. Amazon Prime users can get free shipping on nearly anything that’s made. There’s not the same draw for Best Buy Co., Inc. (NYSE:BBY).

Better buys in retail than Best Buy stock
One of the ways to look at Best Buy’s struggles is through its cash flow from operations vs. competitors’. You can see in the chart below that Best Buy Co., Inc. (NYSE:BBY)’s operational cash flow has fallen off a cliff over the past four quarters while Target and Wal-Mart have remained very steady.