The 700+ hedge funds and money managers tracked by Insider Monkey have already compiled and submitted their 13F filings for the second quarter, which unveil their equity positions as of September 30. We went through these filings, fixed typos and other more significant errors and identified the changes in hedge fund positions. Our extensive review of these public filings is finally over, so this article is set to reveal the smart money sentiment towards Berry Global Group Inc (NYSE:BERY).

Is Berry Global Group Inc (NYSE:BERY) a cheap investment now? The smart money is betting on the stock. The number of bullish hedge fund bets improved by 3 recently. Our calculations also showed that BERY isn’t among the 30 most popular stocks among hedge funds. BERY was in 36 hedge funds’ portfolios at the end of the third quarter of 2018. There were 33 hedge funds in our database with BERY holdings at the end of the previous quarter.

To the average investor there are tons of signals stock market investors can use to appraise their holdings. Some of the best signals are hedge fund and insider trading moves. We have shown that, historically, those who follow the top picks of the best hedge fund managers can outclass the S&P 500 by a very impressive margin (see the details here).

At the end of the third quarter, a total of 36 of the hedge funds tracked by Insider Monkey were bullish on this stock, a change of 9% from the previous quarter. Below, you can check out the change in hedge fund sentiment towards BERY over the last 13 quarters. With the smart money’s capital changing hands, there exists a select group of key hedge fund managers who were upping their stakes meaningfully (or already accumulated large positions). 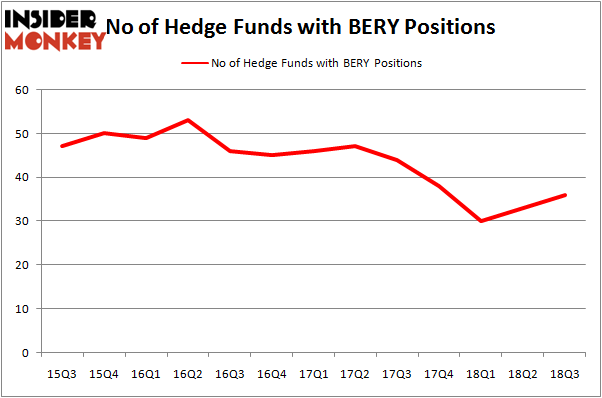 Among these funds, Canyon Capital Advisors held the most valuable stake in Berry Global Group Inc (NYSE:BERY), which was worth $419.5 million at the end of the third quarter. On the second spot was Luminus Management which amassed $312.4 million worth of shares. Moreover, Viking Global, Eminence Capital, and Luminus Management were also bullish on Berry Global Group Inc (NYSE:BERY), allocating a large percentage of their portfolios to this stock.

As industrywide interest jumped, some big names were leading the bulls’ herd. Viking Global, managed by Andreas Halvorsen, assembled the most valuable position in Berry Global Group Inc (NYSE:BERY). Viking Global had $250.8 million invested in the company at the end of the quarter. Clifton S. Robbins’s Blue Harbour Group also made a $50.5 million investment in the stock during the quarter. The following funds were also among the new BERY investors: Clint Carlson’s Carlson Capital, John Bader’s Halcyon Asset Management, and Roger Ibbotson’s Zebra Capital Management.

As you can see these stocks had an average of 19.75 hedge funds with bullish positions and the average amount invested in these stocks was $407 million. That figure was $1.97 billion in BERY’s case. Sealed Air Corporation (NYSE:SEE) is the most popular stock in this table. On the other hand EQM Midstream Partners, LP (NYSE:EQM) is the least popular one with only 8 bullish hedge fund positions. Compared to these stocks Berry Global Group Inc (NYSE:BERY) is more popular among hedge funds. Considering that hedge funds are fond of this stock in relation to its market cap peers, it may be a good idea to analyze it in detail and potentially include it in your portfolio.