Is Bemis Company, Inc. (BMS) Worthy of Your Portfolio?

Hedge funds and large money managers usually invest with a focus on the long-term horizon and, therefore, short-lived dips on the charts, usually don’t make them change their opinion towards a company. The second half of 2015 and the first few months of this year was a stressful period for hedge funds. However, things have been taking a turn for the better in the second half of this year. Small-cap stocks which hedge funds are usually overweight outperformed the market by double digits and it may be a good time to pay attention to hedge funds’ picks before it is too late. In this article we are going to analyze the hedge fund sentiment towards Bemis Company, Inc. (NYSE:BMS).

Is Bemis Company, Inc. (NYSE:BMS) a buy here? Hedge funds seem to be in a pessimistic mood. During the third quarter, the number of investors tracked by Insider Monkey long BMS fell by two to 16. At the end of this article we will also compare BMS to other stocks including AECOM Technology Corp (NYSE:ACM), The Toro Company (NYSE:TTC), and AutoNation, Inc. (NYSE:AN) to get a better sense of its popularity.

What does the smart money think about Bemis Company, Inc. (NYSE:BMS)?

Heading into the fourth quarter of 2016, 16 funds from the Insider Monkey database were long Bemis Company, down by 11% from the end of the second quarter. The graph below displays the number of hedge funds with bullish position in BMS over the last five quarters. With hedgies’ positions undergoing their usual ebb and flow, there exists an “upper tier” of notable hedge fund managers who were boosting their stakes meaningfully (or already accumulated large positions). 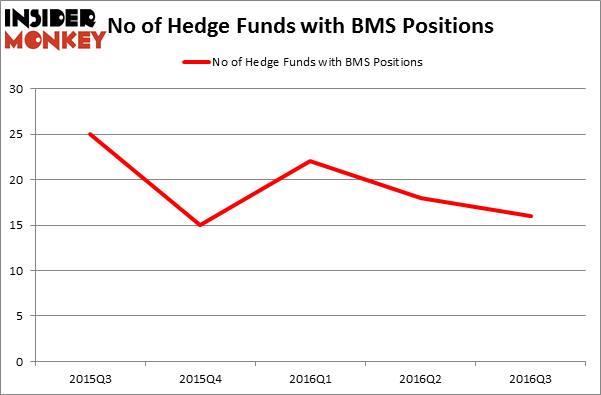 According to Insider Monkey’s hedge fund database, Cliff Asness’ AQR Capital Management is the top shareholder of Bemis Company, Inc. (NYSE:BMS), holding a $59.3 million position in the stock. Coming in second is Steve Cohen’s Point72 Asset Management, which holds a $45.5 million position. Remaining peers that are bullish include Chuck Royce’s Royce & Associates, Jim Simons’ Renaissance Technologies, and D. E. Shaw’s D E Shaw. We should note that none of these hedge funds are among our list of the 100 best performing hedge funds, which is based on the performance of their 13F long positions in non-microcap stocks.