Is Belden Inc. (BDC) A Good Stock To Buy?

Hedge funds and large money managers usually invest with a focus on the long-term horizon and, therefore, short-lived dips on the charts, usually don’t make them change their opinion towards a company. This time it may be different. During the first 6 weeks of the fourth quarter we observed increased volatility and small-cap stocks underperformed the market. Hedge fund investor letters indicated that they are cutting their overall exposure, closing out some position and doubling down on others. Let’s take a look at the hedge fund sentiment towards Belden Inc. (NYSE:BDC) to find out whether it was one of their high conviction long-term ideas.

Belden Inc. (NYSE:BDC) has seen a decrease in activity from the world’s largest hedge funds lately. Our calculations also showed that BDC isn’t among the 30 most popular stocks among hedge funds.

At Q3’s end, a total of 10 of the hedge funds tracked by Insider Monkey were bullish on this stock, a change of -9% from the previous quarter. Below, you can check out the change in hedge fund sentiment towards BDC over the last 13 quarters. With hedgies’ capital changing hands, there exists a few noteworthy hedge fund managers who were increasing their holdings substantially (or already accumulated large positions). 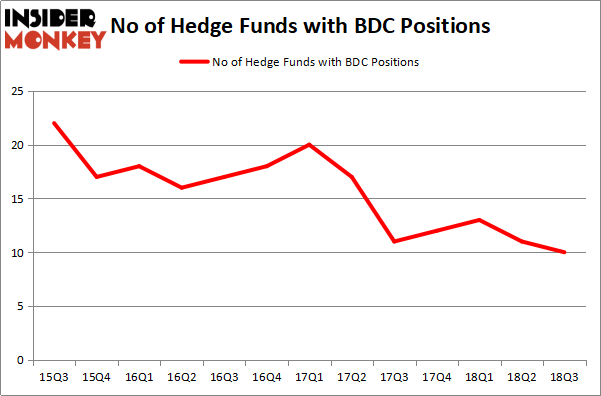 More specifically, Basswood Capital was the largest shareholder of Belden Inc. (NYSE:BDC), with a stake worth $3.9 million reported as of the end of September. Trailing Basswood Capital was Citadel Investment Group, which amassed a stake valued at $2.2 million. Prescott Group Capital Management, Marshall Wace LLP, and PEAK6 Capital Management were also very fond of the stock, giving the stock large weights in their portfolios.

Due to the fact that Belden Inc. (NYSE:BDC) has faced declining sentiment from hedge fund managers, it’s safe to say that there is a sect of hedge funds that elected to cut their positions entirely in the third quarter. It’s worth mentioning that Alexander Roepers’s Atlantic Investment Management dropped the largest investment of all the hedgies watched by Insider Monkey, valued at about $4.5 million in stock, and Joshua Nash’s Ulysses Management was right behind this move, as the fund dropped about $1.2 million worth. These bearish behaviors are intriguing to say the least, as total hedge fund interest fell by 1 funds in the third quarter.

As you can see these stocks had an average of 23.5 hedge funds with bullish positions and the average amount invested in these stocks was $490 million. That figure was $12 million in BDC’s case. Sinclair Broadcast Group, Inc. (NASDAQ:SBGI) is the most popular stock in this table. On the other hand Adtalem Global Education Inc. (NYSE:ATGE) is the least popular one with only 16 bullish hedge fund positions. Compared to these stocks Belden Inc. (NYSE:BDC) is even less popular than ATGE. Considering that hedge funds aren’t fond of this stock in relation to other companies analyzed in this article, it may be a good idea to analyze it in detail and understand why the smart money isn’t behind this stock. This isn’t necessarily bad news. Although it is possible that hedge funds may think the stock is overpriced and view the stock as a short candidate, they may not be very familiar with the bullish thesis. In either case more research is warranted.