Is BCE Inc. (BCE) Going to Burn These Hedge Funds?

While the market driven by short-term sentiment influenced by uncertainty regarding the future of the interest rate environment in the US, declining oil prices and the trade war with China, many smart money investors are keeping their optimism regarding the current bull run, while still hedging many of their long positions. However, as we know, big investors usually buy stocks with strong fundamentals, which is why we believe we can profit from imitating them. In this article, we are going to take a look at the smart money sentiment surrounding BCE Inc. (NYSE:BCE).

Is BCE Inc. (NYSE:BCE) a buy here? Money managers are betting on the stock. The number of bullish hedge fund positions improved by 1 recently. Our calculations also showed that BCE isn’t among the 30 most popular stocks among hedge funds. BCE was in 17 hedge funds’ portfolios at the end of September. There were 16 hedge funds in our database with BCE positions at the end of the previous quarter. 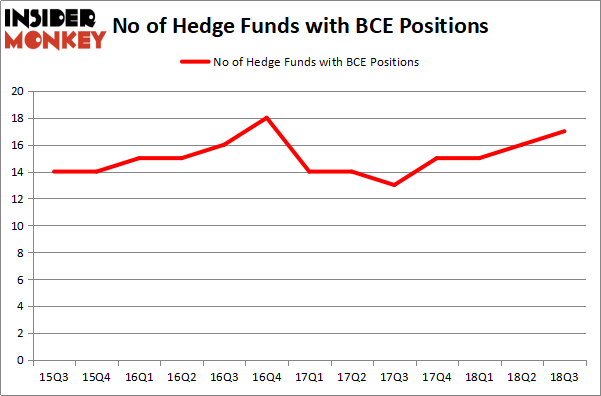 According to publicly available hedge fund and institutional investor holdings data compiled by Insider Monkey, Renaissance Technologies, managed by Jim Simons, holds the most valuable position in BCE Inc. (NYSE:BCE). Renaissance Technologies has a $146.8 million position in the stock, comprising 0.2% of its 13F portfolio. Sitting at the No. 2 spot is Cliff Asness of AQR Capital Management, with a $69.6 million position; 0.1% of its 13F portfolio is allocated to the company. Remaining members of the smart money with similar optimism consist of John Overdeck and David Siegel’s Two Sigma Advisors, Noam Gottesman’s GLG Partners and Israel Englander’s Millennium Management.

As you can see these stocks had an average of 43 hedge funds with bullish positions and the average amount invested in these stocks was $3.22 billion. That figure was $345 million in BCE’s case. Marathon Petroleum Corp (NYSE:MPC) is the most popular stock in this table. On the other hand AFLAC Incorporated (NYSE:AFL) is the least popular one with only 29 bullish hedge fund positions. Compared to these stocks BCE Inc. (NYSE:BCE) is even less popular than AFL. Considering that hedge funds aren’t fond of this stock in relation to other companies analyzed in this article, it may be a good idea to analyze it in detail and understand why the smart money isn’t behind this stock. This isn’t necessarily bad news. Although it is possible that hedge funds may think the stock is overpriced and view the stock as a short candidate, they may not be very familiar with the bullish thesis. In either case more research is warranted.