Is Baytex Energy Corp (BTE) A Good Stock To Buy?

Is Baytex Energy Corp (NYSE:BTE) a good place to invest some of your money right now? We can gain invaluable insight to help us answer that question by studying the investment trends of top investors, who employ world-class Ivy League graduates, who are given immense resources and industry contacts to put their financial expertise to work. The top picks of these firms have historically outperformed the market when we account for known risk factors, making them very valuable investment ideas.

Baytex Energy Corp (NYSE:BTE) was in 10 hedge funds’ portfolios at the end of March. BTE investors should pay attention to a decrease in enthusiasm from smart money of late. There were 12 hedge funds in our database with BTE holdings at the end of the previous quarter. Our calculations also showed that BTE isn’t among the 30 most popular stocks among hedge funds.

To the average investor there are several formulas investors put to use to analyze their stock investments. Two of the most underrated formulas are hedge fund and insider trading activity. We have shown that, historically, those who follow the best picks of the top hedge fund managers can outpace the market by a significant amount (see the details here).

What does smart money think about Baytex Energy Corp (NYSE:BTE)? 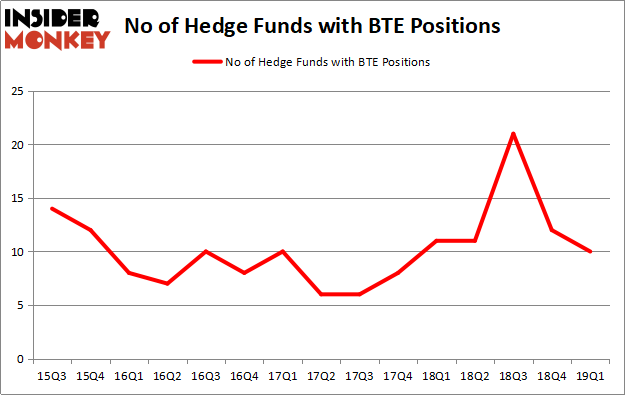 According to publicly available hedge fund and institutional investor holdings data compiled by Insider Monkey, Luminus Management, managed by Jonathan Barrett and Paul Segal, holds the number one position in Baytex Energy Corp (NYSE:BTE). Luminus Management has a $35 million position in the stock, comprising 0.8% of its 13F portfolio. Coming in second is Royce & Associates, managed by Chuck Royce, which holds a $2.3 million position; the fund has less than 0.1%% of its 13F portfolio invested in the stock. Some other professional money managers that hold long positions comprise Peter Muller’s PDT Partners, John Thiessen’s Vertex One Asset Management and John Overdeck and David Siegel’s Two Sigma Advisors.

Seeing as Baytex Energy Corp (NYSE:BTE) has experienced declining sentiment from the smart money, it’s safe to say that there exists a select few fund managers who sold off their entire stakes last quarter. Intriguingly, Brad Dunkley and Blair Levinsky’s Waratah Capital Advisors sold off the biggest position of all the hedgies monitored by Insider Monkey, valued at close to $4.1 million in stock, and Michael Platt and William Reeves’s BlueCrest Capital Mgmt. was right behind this move, as the fund dropped about $0.1 million worth. These transactions are important to note, as total hedge fund interest fell by 2 funds last quarter.

As you can see these stocks had an average of 15.75 hedge funds with bullish positions and the average amount invested in these stocks was $254 million. That figure was $42 million in BTE’s case. Retrophin Inc (NASDAQ:RTRX) is the most popular stock in this table. On the other hand Republic Bancorp, Inc. KY (NASDAQ:RBCAA) is the least popular one with only 7 bullish hedge fund positions. Baytex Energy Corp (NYSE:BTE) is not the least popular stock in this group but hedge fund interest is still below average. This is a slightly negative signal and we’d rather spend our time researching stocks that hedge funds are piling on. Our calculations showed that top 20 most popular stocks among hedge funds returned 6.2% in Q2 through June 19th and outperformed the S&P 500 ETF (SPY) by nearly 3 percentage points. Unfortunately BTE wasn’t nearly as popular as these 20 stocks (hedge fund sentiment was quite bearish); BTE investors were disappointed as the stock returned -9.5% during the same time period and underperformed the market. If you are interested in investing in large cap stocks with huge upside potential, you should check out the top 20 most popular stocks among hedge funds as 13 of these stocks already outperformed the market so far in Q2.