Before we spend days researching a stock idea we’d like to take a look at how hedge funds and billionaire investors recently traded that stock. S&P 500 Index ETF (SPY) lost 8.7% through October 26th. Forty percent of the S&P 500 constituents were down more than 10%. The average return of a randomly picked stock in the index is -9.5%. This means you (or a monkey throwing a dart) have less than an even chance of beating the market by randomly picking a stock. On the other hand, the top 25 most popular S&P 500 stocks among hedge funds had an average loss of 8.8%. In this article, we will take a look at what hedge funds think about Basic Energy Services, Inc (NYSE:BAS).

Basic Energy Services, Inc (NYSE:BAS) shares haven’t seen a lot of action during the third quarter. Overall, hedge fund sentiment was unchanged. The stock was in 14 hedge funds’ portfolios at the end of September. At the end of this article we will also compare BAS to other stocks including Ceragon Networks Ltd. (NASDAQ:CRNT), CM Seven Star Acquisition Corporation (NASDAQ:CMSS), and Gladstone Capital Corporation (NASDAQ:GLAD) to get a better sense of its popularity.

What does the smart money think about Basic Energy Services, Inc (NYSE:BAS)?

Heading into the fourth quarter of 2018, a total of 14 of the hedge funds tracked by Insider Monkey were bullish on this stock, representing no change from the previous quarter. On the other hand, there were a total of 12 hedge funds with a bullish position in BAS at the beginning of this year. With hedgies’ capital changing hands, there exists an “upper tier” of key hedge fund managers who were upping their holdings considerably (or already accumulated large positions). 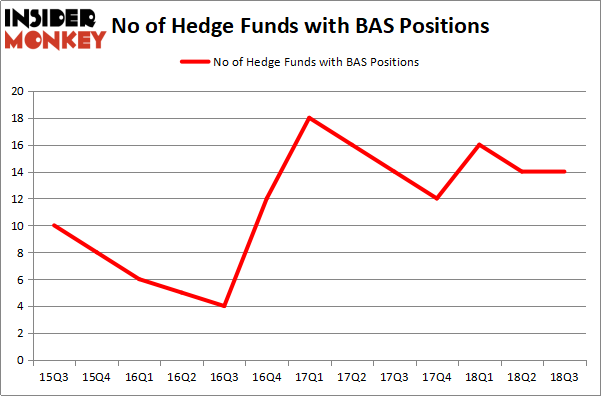 More specifically, Silver Point Capital was the largest shareholder of Basic Energy Services, Inc (NYSE:BAS), with a stake worth $32.7 million reported as of the end of September. Trailing Silver Point Capital was Millennium Management, which amassed a stake valued at $12 million. Whitebox Advisors, Contrarian Capital, and Glendon Capital Management were also very fond of the stock, giving the stock large weights in their portfolios.

Seeing as Basic Energy Services, Inc (NYSE:BAS) has experienced declining sentiment from the aggregate hedge fund industry, it’s safe to say that there exists a select few hedge funds that decided to sell off their full holdings by the end of the third quarter. It’s worth mentioning that Chuck Royce’s Royce & Associates dumped the largest investment of the 700 funds followed by Insider Monkey, worth about $15.6 million in stock. Gavin Saitowitz and Cisco J. del Valle’s fund, Springbok Capital, also said goodbye to its stock, about $0 million worth. These moves are intriguing to say the least, as total hedge fund interest stayed the same (this is a bearish signal in our experience).

As you can see these stocks had an average of 5.5 hedge funds with bullish positions and the average amount invested in these stocks was $17 million. That figure was $75 million in BAS’s case. CM Seven Star Acquisition Corporation (NASDAQ:CMSS) is the most popular stock in this table. On the other hand Templeton Emerging Markets Fund (NYSE:EMF) is the least popular one with only 2 bullish hedge fund positions. Compared to these stocks Basic Energy Services, Inc (NYSE:BAS) is more popular among hedge funds. Considering that hedge funds are fond of this stock in relation to its market cap peers, it may be a good idea to analyze it in detail and potentially include it in your portfolio.