Is Ball Corporation (NYSE:BLL) A Good Stock To Buy?

Ball Corporation (NYSE:BLL) shares haven’t seen a lot of action during the third quarter. Overall, hedge fund sentiment was unchanged. The stock was in 20 hedge funds’ portfolios at the end of September, which wasn’t enough for it to rank as one of the 30 most popular stocks among hedge funds in Q3 of 2018. The level and the change in hedge fund popularity aren’t the only variables you need to analyze to decipher hedge funds’ perspectives. A stock may witness a boost in popularity but it may still be less popular than similarly priced stocks. That’s why at the end of this article we will examine companies such as Citrix Systems, Inc. (NASDAQ:CTXS), Noble Energy, Inc. (NYSE:NBL), and MGM Resorts International (NYSE:MGM) to gather more data points.

“Ball Corporation, which has packaging and aerospace businesses, announced the divestiture of its domestic food and steel aerosol can assets during the quarter. Despite this divestiture, the company maintained its 2019 free-cash-flow guidance, and indicated it is allocating the proceeds to additional share repurchases.” – As reported in First Eagle Fund of America’s Q3 Commentary.

In the eyes of most traders, hedge funds are viewed as unimportant, old investment tools of years past. While there are more than 8000 funds trading at present, We choose to focus on the moguls of this group, around 700 funds. Most estimates calculate that this group of people administer the majority of the smart money’s total capital, and by paying attention to their first-class picks, Insider Monkey has discovered a few investment strategies that have historically outrun the market. Insider Monkey’s flagship hedge fund strategy beat the S&P 500 index by 6 percentage points annually since its inception in May 2014 through early November 2018. We were able to generate large returns even by identifying short candidates. Our portfolio of short stocks lost 26.1% since February 2017 even though the market was up nearly 19% during the same period. We just shared a list of 11 short targets in our latest quarterly update.

How have hedgies been trading Ball Corporation (NYSE:BLL)? 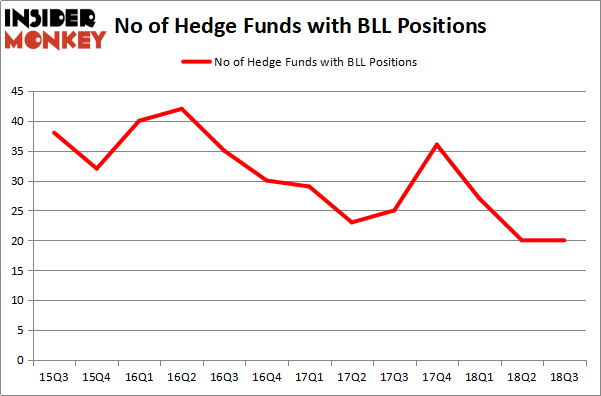 The largest stake in Ball Corporation (NYSE:BLL) was held by Rivulet Capital, which reported holding $136.8 million worth of stock at the end of September. It was followed by Chilton Investment Company with a $134.4 million position. Other investors bullish on the company included Brookside Capital, Millennium Management, and Lodge Hill Capital.

Since Ball Corporation (NYSE:BLL) has faced bearish sentiment from hedge fund managers, it’s safe to say that there is a sect of fund managers who were dropping their positions entirely last quarter. Interestingly, Robert Joseph Caruso’s Select Equity Group cut the biggest investment of the “upper crust” of funds tracked by Insider Monkey, totaling an estimated $26.6 million in stock. Malcolm Fairbairn’s fund, Ascend Capital, also cut its stock, about $22.9 million worth. These transactions are intriguing to say the least, as total hedge fund interest stayed the same (this is a bearish signal in our experience).

As you can see these stocks had an average of 34 hedge funds with bullish positions and the average amount invested in these stocks was $1.57 billion. That figure was $467 million in BLL’s case. MGM Resorts International (NYSE:MGM) is the most popular stock in this table. On the other hand Waters Corporation (NYSE:WAT) is the least popular one with only 23 bullish hedge fund positions. Compared to these stocks Ball Corporation (NYSE:BLL) is even less popular than WAT. Considering that hedge funds aren’t fond of this stock in relation to other companies analyzed in this article, it may be a good idea to analyze it in detail and understand why the smart money isn’t behind this stock. This isn’t necessarily bad news. Although it is possible that hedge funds may think the stock is overpriced and view the stock as a short candidate, they may not be very familiar with the bullish thesis. In either case more research is warranted.