Our extensive research has shown that imitating the smart money can generate significant returns for retail investors, which is why we track nearly 750 active prominent money managers and analyze their quarterly 13F filings. The stocks that are heavily bought by hedge funds historically outperformed the market, though there is no shortage of high profile failures like hedge funds’ 2018 losses in Facebook and Apple. Let’s take a closer look at what the funds we track think about Baidu, Inc. (NASDAQ:BIDU) in this article.

Is Baidu, Inc. (NASDAQ:BIDU) ready to rally soon? Money managers are selling. The number of long hedge fund bets went down by 1 recently. Our calculations also showed that BIDU isn’t among the 30 most popular stocks among hedge funds.

Unlike the largest US hedge funds that are convinced Dow will soar past 40,000 or the world’s most bearish hedge fund that’s more convinced than ever that a crash is coming, our long-short investment strategy doesn’t rely on bull or bear markets to deliver double digit returns. We only rely on the best performing hedge funds‘ buy/sell signals. Let’s take a look at the key hedge fund action regarding Baidu, Inc. (NASDAQ:BIDU).

What does smart money think about Baidu, Inc. (NASDAQ:BIDU)?

At Q3’s end, a total of 43 of the hedge funds tracked by Insider Monkey were bullish on this stock, a change of -2% from one quarter earlier. On the other hand, there were a total of 53 hedge funds with a bullish position in BIDU a year ago. With hedge funds’ sentiment swirling, there exists a select group of noteworthy hedge fund managers who were boosting their stakes significantly (or already accumulated large positions). 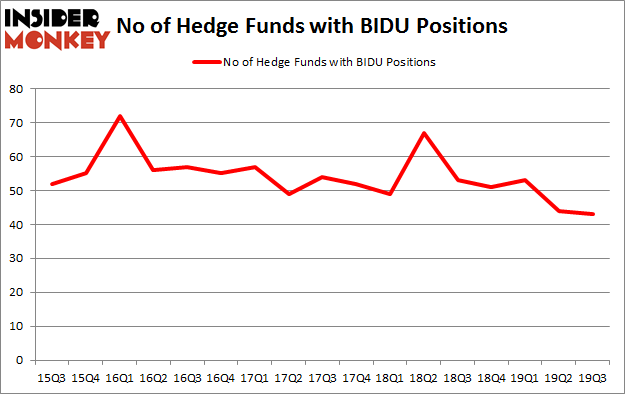 According to publicly available hedge fund and institutional investor holdings data compiled by Insider Monkey, First Pacific Advisors, managed by Robert Rodriguez and Steven Romick, holds the biggest position in Baidu, Inc. (NASDAQ:BIDU). First Pacific Advisors has a $245.7 million position in the stock, comprising 2.3% of its 13F portfolio. The second most bullish fund manager is John W. Rogers of Ariel Investments, with a $193.4 million position; 2.6% of its 13F portfolio is allocated to the company. Remaining hedge funds and institutional investors that are bullish encompass Ken Fisher’s Fisher Asset Management, David E. Shaw’s D E Shaw and John Overdeck and David Siegel’s Two Sigma Advisors. In terms of the portfolio weights assigned to each position Punch Card Capital allocated the biggest weight to Baidu, Inc. (NASDAQ:BIDU), around 16.08% of its portfolio. Tiger Pacific Capital is also relatively very bullish on the stock, setting aside 7 percent of its 13F equity portfolio to BIDU.

Since Baidu, Inc. (NASDAQ:BIDU) has faced bearish sentiment from the smart money, we can see that there exists a select few funds that elected to cut their full holdings heading into Q4. At the top of the heap, Karthik Sarma’s SRS Investment Management dumped the biggest position of the “upper crust” of funds monitored by Insider Monkey, worth an estimated $48 million in stock. Paul Marshall and Ian Wace’s fund, Marshall Wace, also said goodbye to its stock, about $18.9 million worth. These bearish behaviors are intriguing to say the least, as aggregate hedge fund interest was cut by 1 funds heading into Q4.

As you can see these stocks had an average of 36 hedge funds with bullish positions and the average amount invested in these stocks was $909 million. That figure was $1745 million in BIDU’s case. The Allstate Corporation (NYSE:ALL) is the most popular stock in this table. On the other hand Dow Inc. (NYSE:DOW) is the least popular one with only 32 bullish hedge fund positions. Baidu, Inc. (NASDAQ:BIDU) is not the most popular stock in this group but hedge fund interest is still above average. Our calculations showed that top 20 most popular stocks among hedge funds returned 34.7% in 2019 through November 22nd and outperformed the S&P 500 ETF (SPY) by 8.5 percentage points. Hedge funds were also right about betting on BIDU as the stock returned 14.8% during the fourth quarter (through 11/22) and outperformed the market. Hedge funds were rewarded for their relative bullishness.