Is AT&T Inc. (NYSE:T) Going to Burn These Hedge Funds?

It is already common knowledge that individual investors do not usually have the necessary resources and abilities to properly research an investment opportunity. As a result, most investors pick their illusory “winners” by making a superficial analysis and research that leads to poor performance on aggregate. Since stock returns aren’t usually symmetrically distributed and index returns are more affected by a few outlier stocks (i.e. the FAANG stocks dominating and driving S&P 500 Index’s returns in recent years), more than 50% of the constituents of the Standard and Poor’s 500 Index underperform the benchmark. Hence, if you randomly pick a stock, there is more than 50% chance that you’d fail to beat the market. At the same time, the 30 most favored S&P 500 stocks by the hedge funds monitored by Insider Monkey generated a return of 15.1% over the last 12 months (vs. 5.6% gain for SPY), with 53% of these stocks outperforming the benchmark. Of course, hedge funds do make wrong bets on some occasions and these get disproportionately publicized on financial media, but piggybacking their moves can beat the broader market on average. That’s why we are going to go over recent hedge fund activity in AT&T Inc. (NYSE:T).

AT&T Inc. (NYSE:T) was in 70 hedge funds’ portfolios at the end of the third quarter of 2018. The stock has experienced a decrease in activity from the world’s largest hedge funds lately, as there were 94 hedge funds in our database with T positions at the end of the previous quarter. Despite 24 investors who said goodbye to their positions in AT&T Inc. (NYSE:T) during the third quarter, the stock still managed to rank among 30 most popular stocks among hedge funds in Q3 of 2018, although it didn’t make it among top 20. Taking all this account, we still need more information about the stock to determine whether it could be a good investment opportunity, therefore we are going to analyze it further more.

Among those investors who don’t have much enthusiasm for AT&T Inc. (NYSE:T) was Olympic Peak’s Todd Westhus, who discussed the stock at the recent Sohn Tel Aviv conference and said that AT&T bonds are overpriced. He further explained that the company “has a ton of debt” and said “This is a very mature business. Revenues have been declining.” Todd Westhus proposed shorting the company’s bonds. The company’s spokesperson replied that they hope “to return to historical debt levels by the end of 2022.”

Continuing with our examination of the stock, we’ll now take a look at the new hedge fund action encompassing AT&T Inc. (NYSE:T).

How have hedgies been trading AT&T Inc. (NYSE:T)?

At the end of the third quarter, a total of 70 of the hedge funds tracked by Insider Monkey held long positions in this stock, a change of -26% from the second quarter of 2018. Below, you can check out the change in hedge fund sentiment towards T over the last 13 quarters. With hedgies’ sentiment swirling, there exists a few key hedge fund managers who were upping their holdings significantly (or already accumulated large positions). 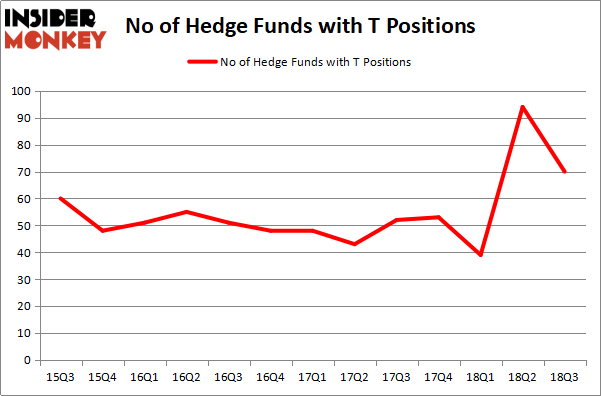 The largest stake in AT&T Inc. (NYSE:T) was held by Citadel Investment Group, which reported holding $717.2 million worth of stock at the end of September. It was followed by D E Shaw with a $625.4 million position. Other investors bullish on the company included Adage Capital Management, Levin Capital Strategies, and Two Sigma Advisors.

Because AT&T Inc. (NYSE:T) has witnessed bearish sentiment from the smart money, logic holds that there were a few hedgies who were dropping their full holdings by the end of the third quarter. It’s worth mentioning that Seth Klarman’s Baupost Group said goodbye to the biggest investment of all the hedgies followed by Insider Monkey, comprising about $304.4 million in call options. George Soros’s fund, Soros Fund Management, also dumped its call options, about $128.4 million worth. These transactions are intriguing to say the least, as aggregate hedge fund interest fell by 24 funds by the end of the third quarter.

As you can see these stocks had an average of 53 hedge funds with bullish positions and the average amount invested in these stocks was $4081 million. That figure was $3763 million in T’s case. Cisco Systems, Inc. (NASDAQ:CSCO) is the most popular stock in this table. On the other hand Taiwan Semiconductor Manufacturing Company Limited (NYSE:TSM) is the least popular one with only 42 bullish hedge fund positions. Compared to these stocks AT&T Inc. (NYSE:T) is more popular among hedge funds. Considering that hedge funds are fond of this stock in relation to its market cap peers, it may be a good idea to analyze it in detail and potentially include it in your portfolio.