Is ATN International, Inc. (NASDAQ:ATNI) Worthy of Your Portfolio?

ATN International, Inc. (NASDAQ:ATNI) has seen an increase in activity from the world’s largest hedge funds lately. There were 8 smart money investors long the stock at the end of the third quarter, which is up by 2 from the previous quarter. In spite of this new enthusiasm for the stock, the number of its shareholders was far from enough for it to be included in the list of 30 most popular stocks among hedge funds in Q3 of 2018. But, just because the company wasn’t a part of the favorite group of stocks during the quarter that doesn’t mean it is not popular when compared to similarly valued companies. That’s why, we are going to analyze ATN International, Inc. (NASDAQ:ATNI) furthermore.

Here is what Third Avenue, one of its largest shareholders, recently said about the stock in its Small-Cap Value Fund’s Portfolio Manager Commentary:

“ATNI had a spectacular quarter, rising over 40%. The thesis on ATNI was described in the Fund’s June 30,2018 letter. When the position was initiated, we believed that the valuation overly discounted the impacts from hurricane damage to its Caribbean telecom infrastructure assets. The thesis has played out well so far, as results for the second quarter showed impressive improvement. The company has done an outstanding job rebuilding its asset base while also investing for the future. In addition, they monetized assets during the quarter at a premium to our net asset value estimates. The recent sale of their alternative energy assets is a prototypical example of the resource conversion actions that Fun Management craves. ATNI is run by a quintessential Third Avenue management team. They are skilled operators, creative financiers and prudent allocators. They also have a dispassionate attitude towards their assets and sell willingly if the price is right. We are happy shareowners and are confident management will wisely redeploy the sales proceeds.”

What does the smart money think about ATN International, Inc. (NASDAQ:ATNI)? 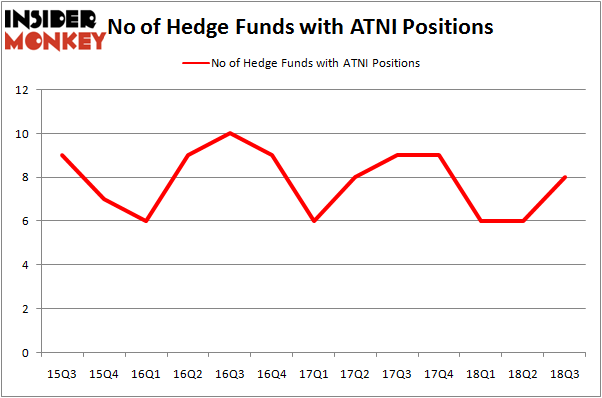 The largest stake in ATN International, Inc. (NASDAQ:ATNI) was held by Renaissance Technologies, which reported holding $42.6 million worth of stock at the end of September. It was followed by Royce & Associates with a $12.6 million position. Other investors bullish on the company included Third Avenue Management, D E Shaw, and Millennium Management.

Consequently, specific money managers were breaking ground themselves. Millennium Management, managed by Israel Englander, created the most valuable position in ATN International, Inc. (NASDAQ:ATNI). Millennium Management had $1.8 million invested in the company at the end of the quarter. Matthew Hulsizer’s PEAK6 Capital Management also initiated a $1.3 million position during the quarter. The other funds with new positions in the stock are Peter Rathjens, Bruce Clarke and John Campbell’s Arrowstreet Capital and Noam Gottesman’s GLG Partners.

As you can see these stocks had an average of 11 hedge funds with bullish positions and the average amount invested in these stocks was $71 million. That figure was also $71 million in ATNI’s case. The Marcus Corporation (NYSE:MCS) is the most popular stock in this table. On the other hand Covia Holdings Corporation (NYSE:CVIA) is the least popular one with only 7 bullish hedge fund positions. ATN International, Inc. (NASDAQ:ATNI) is not the least popular stock in this group but hedge fund interest is still below average. This is a slightly negative signal and we’d rather spend our time researching stocks that hedge funds are piling on. In this regard MCS might be a better candidate to consider a long position.