Is Atlantic Power Corp (AT) A Good Stock To Buy?

The successful funds run by legendary investors such as Dan Loeb and David Tepper make hundreds of millions of dollars for themselves and their investors by spending enormous resources doing research on small cap stocks that big investment banks don’t follow. Because of their pay structures, they have strong incentive to do the research necessary to beat the market. That’s why we pay close attention to what they think in small cap stocks. In this article, we take a closer look at Atlantic Power Corp (NYSE:AT) from the perspective of those successful funds.

Atlantic Power Corp (NYSE:AT) was in 13 hedge funds’ portfolios at the end of September. AT shareholders have witnessed an increase in support from the world’s most successful money managers recently. There were 10 hedge funds in our database with AT holdings at the end of the previous quarter. The level and the change in hedge fund popularity aren’t the only variables you need to analyze to decipher hedge funds’ perspectives. A stock may witness a boost in popularity but it may still be less popular than similarly priced stocks. That’s why at the end of this article we will examine companies such as Farmers National Banc Corp (NASDAQ:FMNB), The Chefs Warehouse, Inc (NASDAQ:CHEF), and Panhandle Oil and Gas Inc. (NYSE:PHX) to gather more data points.

What have hedge funds been doing with Atlantic Power Corp (NYSE:AT)?

At Q3’s end, a total of 13 of the hedge funds tracked by Insider Monkey were bullish on this stock, a 30% increase from one quarter earlier. The graph below displays the number of hedge funds with bullish position in AT over the last 5 quarters, which shows them hitting a yearly high at the end of September. With hedgies’ positions undergoing their usual ebb and flow, there exists an “upper tier” of noteworthy hedge fund managers who were upping their holdings meaningfully (or already accumulated large positions). 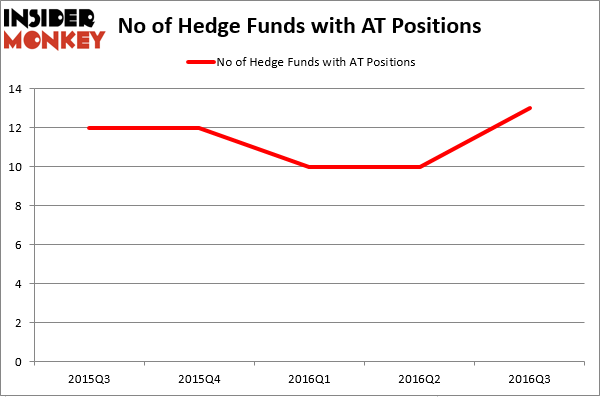 Of the funds tracked by Insider Monkey, Nathaniel August’s Mangrove Partners has the biggest position in Atlantic Power Corp (NYSE:AT), worth close to $19.4 million, accounting for 4.5% of its total 13F portfolio. The second most bullish fund manager is 12 West Capital Management, led by Joel Ramin, which holds an $18.1 million position; the fund has 2.6% of its 13F portfolio invested in the stock. Some other hedge funds and institutional investors with similar optimism comprise David M. Markowitz’s Oskie Capital Management, D E Shaw, one of the biggest hedge funds in the world, and James Dondero’s Highland Capital Management. We should note that Mangrove Partners is among our list of the 100 best performing hedge funds which is based on the performance of their 13F long positions in non-microcap stocks.

Is B2Gold Corp (BTG) A Good Stock To Buy?
Monthly Newsletter Strategy
Download a free copy of our newsletter and see the details inside!
Hedge Fund Resource Center
Related News
Atlantic Power Corp (AT): Mangrove Partners Raises Stake to 6.4% The Best Monthly Dividend Stocks Atlantic Power Corp (AT): Here is How A Hedge Fund Made 38% Trading The Stock Noteworthy Insider Buying at This Biopharmaceutical Company and 2 Other Battered Companies Billionaire Carl Icahn Plans Shake Up of AIG, Halvorsen Reveals Yet Another Energy Bet, Plus Two Other Moves Insider Buying Investors Should Follow Witnessed At These 3 Companies Should You Avoid Atlantic Power Corp (AT)? 11 Best Science YouTube Channels To Watch 10 Most Famous Cubist Paintings 5 Countries That Have the Most Drones
Billionaire Hedge Funds