As we already know from media reports and hedge fund investor letters, many hedge funds lost money in fourth quarter, blaming macroeconomic conditions and unpredictable events that hit several sectors, with technology among them. Nevertheless, most investors decided to stick to their bullish theses and recouped their losses by the end of the first quarter. We get to see hedge funds’ thoughts towards the market and individual stocks by aggregating their quarterly portfolio movements and reading their investor letters. In this article, we will particularly take a look at what hedge funds think about ASML Holding N.V. (NASDAQ:ASML).

Is ASML Holding N.V. (NASDAQ:ASML) a healthy stock for your portfolio? The smart money is getting less optimistic. The number of bullish hedge fund bets were cut by 1 in recent months. Our calculations also showed that ASML isn’t among the 30 most popular stocks among hedge funds. 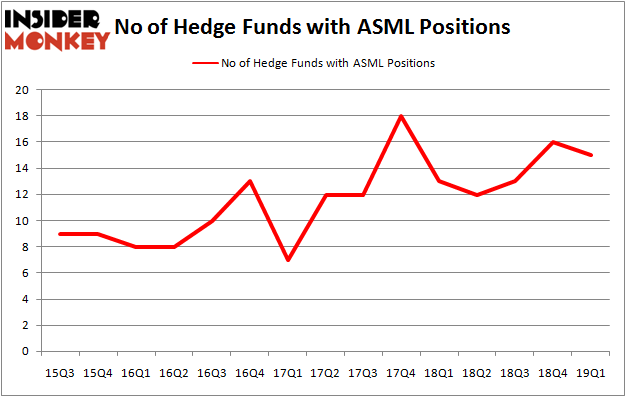 According to Insider Monkey’s hedge fund database, Ken Fisher’s Fisher Asset Management has the largest position in ASML Holding N.V. (NASDAQ:ASML), worth close to $371.8 million, amounting to 0.5% of its total 13F portfolio. On Fisher Asset Management’s heels is Jim Simons of Renaissance Technologies, with a $48.2 million position; less than 0.1%% of its 13F portfolio is allocated to the stock. Some other members of the smart money that are bullish include D. E. Shaw’s D E Shaw, Ken Griffin’s Citadel Investment Group and Matthew Hulsizer’s PEAK6 Capital Management.

Since ASML Holding N.V. (NASDAQ:ASML) has faced a decline in interest from the entirety of the hedge funds we track, it’s easy to see that there was a specific group of fund managers who sold off their positions entirely heading into Q3. It’s worth mentioning that Simon Sadler’s Segantii Capital dropped the biggest stake of the “upper crust” of funds monitored by Insider Monkey, valued at about $47.1 million in stock. David Costen Haley’s fund, HBK Investments, also dropped its stock, about $8.2 million worth. These bearish behaviors are interesting, as total hedge fund interest was cut by 1 funds heading into Q3.

As you can see these stocks had an average of 67 hedge funds with bullish positions and the average amount invested in these stocks was $5138 million. That figure was $504 million in ASML’s case. Booking Holdings Inc. (NASDAQ:BKNG) is the most popular stock in this table. On the other hand Caterpillar Inc. (NYSE:CAT) is the least popular one with only 53 bullish hedge fund positions. Compared to these stocks ASML Holding N.V. (NASDAQ:ASML) is even less popular than CAT. Our calculations showed that top 20 most popular stocks among hedge funds returned 6.2% in Q2 through June 19th and outperformed the S&P 500 ETF (SPY) by nearly 3 percentage points. A small number of hedge funds were also right about betting on ASML, though not to the same extent, as the stock returned 5.9% during the same time frame and outperformed the market as well.