Is Apple Inc. (AAPL) Seriously Comparable To BlackBerry or Nokia?

The tech world is constantly evolving and corporations can rise and fall in a few short quarters. With a long-dated option (LEAPS) and a little bit of clairvoyance, an investor could make a fortune. It is easy to dream of finding that one special company that will add a couple of zeros to your portfolio. The reality is that betting on the sudden reversal of a company is full of unknowns. There are a number of interesting turnaround plays in the mobile sphere, but for now it is safer to stick with a well-known company like Apple Inc. (NASDAQ:AAPL). 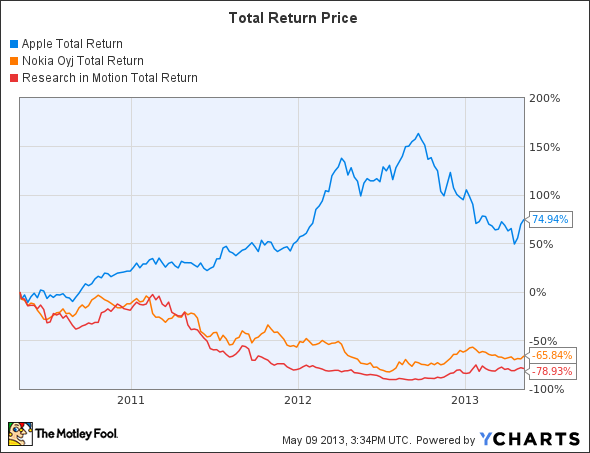 Recent U.S. market share data isn’t encouraging; Nokia doesn’t even appear in the top five manufacturers. Thankfully, its position in emerging markets is better. A recent survey in Brazil, Saudi Arabia, India and Nigeria showed that around 20% of consumers would prefer to purchase a Nokia or an Apple Inc. (NASDAQ:AAPL) device. The company recently released their Lumia 521 for income-constrained consumers. Its low price of $129 with Windows Phone 8 has helped it to sell out across many American Wal-Marts. Slowly but surely, Nokia’s Lumia phones are bringing the company back from the dead.

Even with these encouraging developments, Nokia Corporation (ADR) (NYSE:NOK) has a difficult path ahead of it. The company has a higher debt load than many of its competitors with a total debt to equity ratio of 0.73. Even though Nokia posted negative income from continued operations in 2012 and 2011, it is trading above its book value at a price to book ratio of 1.33. By 2014 it looks like Nokia could make earnings per share (EPS) of only $0.17. Until profit margins are consistently healthier or the company trades closer to book value, Nokia is a comparably risky investment.

Research In Motion Ltd (NASDAQ:BBRY) is a Canadian firm that made its money from fat corporate and government contracts. With more workers bringing their own devices to work and the Apple Inc. (NASDAQ:AAPL)’s focus on the corporate sphere, BlackBerry is facing intense competition. For situations where a very high degree of privacy is required, BlackBerry still has an advantage. A number of its devices were recently approved for the Department of Defense’s networks.

In the consumer sector, Research In Motion Ltd (NASDAQ:BBRY) still faces major challenges. In a recent emerging markets survey only 10% of consumers said that disregarding price, they would prefer to purchase a Research In Motion Ltd (NASDAQ:BBRY). The company can still carve out a niche for itself, but investors have to realize that there is a minuscule chance it will ever reach the size or power of Apple Inc. (NASDAQ:AAPL). BlackBerry’s strengths are in high security situations for governments and corporations.

On the bright side, the company has no debt and has made $108 million in normalized operating income over the last two quarters. If investors and management are willing to accept the company as a niche player, then its current price to book ratio of 0.71 and gross margin of 41.9% paint it as an interesting company to watch.