Apple Inc. (NASDAQ:AAPL) has been the subject of a rather high level of chatter on the blogosphere in recent weeks, as investors are unsure of how to trade the tech giant under shadow of the looming fiscal cliff. With the stock up almost 45% year to date, it’s understandable that many would see profit-taking as a good decision, and the technicals seem to support this play (see “Google vs. Apple: Technicals vs. Fundamentals“). 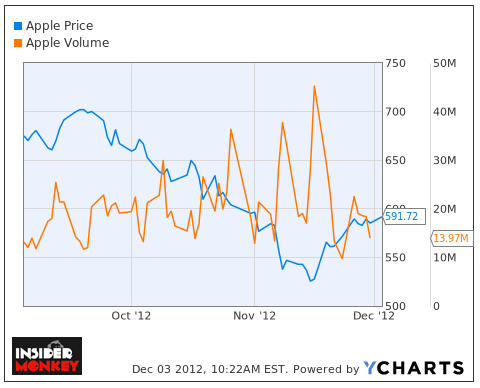 On the bullish side, however, the stock’s valuation is obviously attractive at 10 times forward earnings and a PEG of 0.67, and a possible special dividend only sweetens this picture (see “Will Apple Pay a Special Dividend?“). As you can see above, trading volume has slowed in recent weeks as shares of Apple Inc. (NASDAQ:AAPL) have seen a modest uptick from their mid-November lows, and there’s also some intriguing opinions coming from some of the market’s most active pundits.

On CNBC last Friday, the “Options Action” trading staff was discussing the odds that Apple would bulk up the collective wallet of its shareholders, in addition to the possibility that a special pre-fiscal cliff dividend would be paid by other tech players like Microsoft Corporation (NASDAQ:MSFT) and Oracle Corporation (NASDAQ:ORCL). On the subject of Apple Inc. (NASDAQ:AAPL), Mike Khouw of CRT Capital Group LLC had this to say:

“Well, I don’t know that it’s good for the markets that you have company management making decisions based on the vagaries of what’s going to come out of Washington. But there’s no question that a lot of these companies — and I think notably if Apple in particular — that should be retuning some cash to shareholders, and that’s irrespective of the tax laws on dividends.”

Furthermore, NationsShares’s Scott Nations fesses up to being mistaken with his bearish attitude on the stock, stating that he “was wrong on this — Mike was right,” adding that shares of AAPL are “still reasonably priced,” and the potential of a special dividend is just icing on the cake.

In our opinion, it’s tough to ignore the cheap valuation of Apple, and even though top and bottom line growth has slowed this year, sell-side analysts still expect 19-20% EPS growth per year through at least 2017. This forecast is above what’s expected of Google Inc (NASDAQ:GOOG) (15.7%) and Microsoft (9.8%), but it still trades at a discount to both of its closest tech peers.

What are your thoughts on Apple Inc. (NASDAQ:AAPL)? Are you betting on the possibility of a special dividend, perhaps in the range of $20 to $25 a share? Or are you looking to hold shares of AAPL for the longer term? Even more so, are there any readers who believe that the $600 mark is a pipe dream for the Cupertino-based company at the moment? Let us know your thoughts in the comments section below.