Is Anheuser Busch Inbev SA (ADR) (BUD) Biting Off More Than It Can Chew?

For Belgians, beer it’s not just a frothy drink. There’s a whole culture that lies behind the nearly 500 different types of brew – many of which are served in their own, personalized glass – and the hundreds of breweries that date back centuries.

No wonder Anheuser Busch Inbev SA (ADR) (NYSE:BUD)‘s roots can be traced back to Den Horen, one of the oldest breweries in Belgium. Yet, despite its long heritage and its prominent position in most of the world’s top beer markets, over the last couple of years, its revenue growth has gone into a steady freefall. 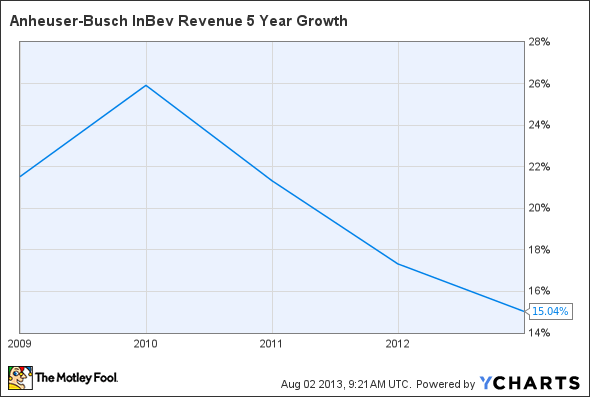 Looking ahead, what does the future hold for this world-class brewer?

A quick glance at the latest numbers

The maker of Beck’s and Stella Artois reported its latest numbers on July 31. Anheuser Busch Inbev SA (ADR) (NYSE:BUD) wrapped up a rather bumpy, yet better-than-expected, second quarter. It chalked up revenue of roughly $10.6 billion, while net profit rolled in at almost $7.50 billion.

On an organic basis, revenue was up nearly 4% year-over-year as higher-margin premium beers somehow covered up lower volumes. For instance, in North America, volumes were down roughly 2% as the cooler-than-normal weather didn’t really whet consumers’ appetite for a cold one. However, a pick-up in prices, as well as distribution cost savings, gave its U.S. EBITDA margin a 0.8% boost.

On the other hand, its bottom line was by $6.31 billion from an accounting adjustment on the initial investment held in Mexican brewer Grupo Modelo, the maker of Corona. Normalized profit – profit free of unusual or one-time influences – came in at $1.50 billion or $0.93 a share, taking a nearly 22% nosedive on a year-over-year basis. The brewer blamed the higher income taxes and the lofty financing costs for this decline.

Since 1998, Anheuser Busch Inbev SA (ADR) (NYSE:BUD) has been working its way into the Chinese market either by acquisitions or by forming partnerships with leading Chinese brewers. Over the past two years, though, it focused on regional investments aiming at getting a firm grip on the world’s biggest beer market in terms of volumes. Just recently, it acquired four breweries in China with a total capacity of approximately 9 million hectoliters.

Needless to say, its investments have already started bearing fruit. Throughout 2012, the company saw its Focus Brands in China, including Budweiser and Harbin, grow 8%, while Budweiser came out on top among premium beer brands. Today, Anheuser Busch Inbev SA (ADR) (NYSE:BUD) is a major industry player in the country behind domestic rivals TsingtaoBrewery and CR Snow – a joint-venture between China Resources Enterprise and UK-based SABMiller.

Looking ahead, the company plans to beef up investments in the country in an effort to make Budweiser, its flagship brand, the world’s first global beer. Carlos Britos – the man holding the reins of the brew juggernaut – told the Wall Street Journal that the global beer industry is on the verge of rapid changes. “American culture is something that travels. Budweiser is traveling with it.”