Is AMETEK, Inc. (AME) Going to Burn These Hedge Funds?

Is AMETEK, Inc. (NYSE:AME) the right pick for your portfolio? The best stock pickers are in a bearish mood. The number of bullish hedge fund positions decreased by 4 recently. Our calculations also showed that ame isn’t among the 30 most popular stocks among hedge funds.

Heading into the fourth quarter of 2018, a total of 33 of the hedge funds tracked by Insider Monkey held long positions in this stock, a change of -11% from the previous quarter. Below, you can check out the change in hedge fund sentiment towards AME over the last 13 quarters. So, let’s review which hedge funds were among the top holders of the stock and which hedge funds were making big moves. 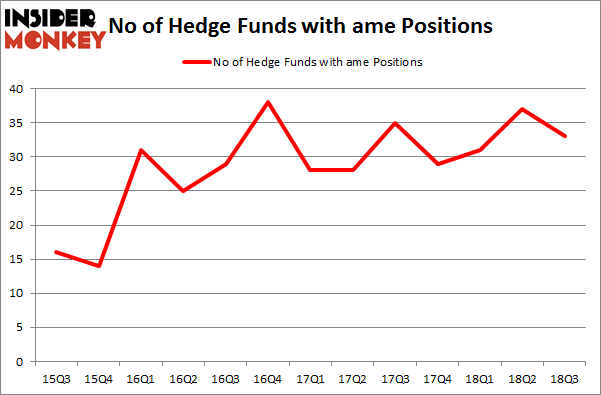 The largest stake in AMETEK, Inc. (NYSE:AME) was held by Citadel Investment Group, which reported holding $257.8 million worth of stock at the end of September. It was followed by Select Equity Group with a $138.9 million position. Other investors bullish on the company included GAMCO Investors, Millennium Management, and D E Shaw.

Since AMETEK, Inc. (NYSE:AME) has experienced declining sentiment from the entirety of the hedge funds we track, logic holds that there exists a select few hedgies who sold off their entire stakes heading into Q3. At the top of the heap, Greg Poole’s Echo Street Capital Management dropped the largest position of all the hedgies tracked by Insider Monkey, totaling about $6.9 million in stock, and Andrew Feldstein and Stephen Siderow’s Blue Mountain Capital was right behind this move, as the fund said goodbye to about $3.6 million worth. These transactions are intriguing to say the least, as total hedge fund interest dropped by 4 funds heading into Q3.

Let’s now review hedge fund activity in other stocks – not necessarily in the same industry as AMETEK, Inc. (NYSE:AME) but similarly valued. We will take a look at Apache Corporation (NYSE:APA), Plains All American Pipeline, L.P. (NYSE:PAA), FirstEnergy Corp. (NYSE:FE), and IAC/InterActiveCorp (NASDAQ:IAC). All of these stocks’ market caps are closest to AME’s market cap.

As you can see these stocks had an average of 31.25 hedge funds with bullish positions and the average amount invested in these stocks was $1.94 billion. That figure was $1.19 billion in AME’s case. IAC/InterActiveCorp (NASDAQ:IAC) is the most popular stock in this table. On the other hand Plains All American Pipeline, L.P. (NYSE:PAA) is the least popular one with only 10 bullish hedge fund positions. AMETEK, Inc. (NYSE:AME) is not the most popular stock in this group but hedge fund interest is still above average. This is a slightly positive signal but we’d rather spend our time researching stocks that hedge funds are piling on. In this regard IAC might be a better candidate to consider a long position.