We started seeing tectonic shifts in the market during the third quarter. Small-cap stocks underperformed the large-cap stocks by more than 10 percentage points between the end of June 2015 and the end of June 2016. A mean reversion in trends bumped small-cap stocks’ return to almost 9% in Q3, outperforming their large-cap peers by 5 percentage points. The momentum in small-cap space hasn’t subsided during this quarter either. Small-cap stocks beat large-cap stocks by another 5 percentage points during the first 7 weeks of this quarter. Hedge funds and institutional investors tracked by Insider Monkey usually invest a disproportionate amount of their portfolios in smaller cap stocks. We have been receiving indications that hedge funds were boosting their overall exposure and this is one of the factors behind the recent movements in major indices. In this article, we will take a closer look at hedge fund sentiment towards America Movil SAB de CV (ADR) (NYSE:AMX) .

America Movil SAB de CV (ADR) (NYSE:AMX) was in 11 hedge funds’ portfolios at the end of the third quarter of 2016. AMX shareholders have witnessed a decrease in hedge fund interest recently. There were 11 hedge funds in our database with AMX holdings at the end of September. At the end of this article we will also compare AMX to other stocks including Carnival plc (ADR) (NYSE:CUK), McKesson Corporation (NYSE:MCK), and Carnival Corporation (NYSE:CCL) to get a better sense of its popularity.

With all of this in mind, we’re going to go over the key action regarding America Movil SAB de CV (ADR) (NYSE:AMX).

At the end of the third quarter, a total of 11 of the hedge funds tracked by Insider Monkey held long positions in this stock, a change of -15% from the second quarter of 2016. The graph below displays the number of hedge funds with bullish position in AMX over the last 5 quarters. With hedge funds’ sentiment swirling, there exists a few noteworthy hedge fund managers who were increasing their stakes substantially (or already accumulated large positions). 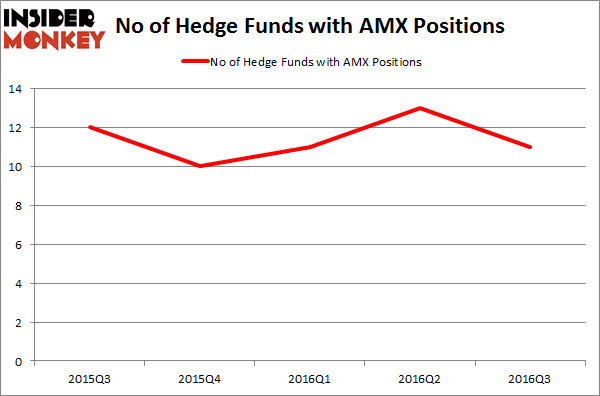 According to Insider Monkey’s hedge fund database, Ken Fisher’s Fisher Asset Management has the largest position in America Movil SAB de CV (ADR) (NYSE:AMX), worth close to $147 million, corresponding to 0.3% of its total 13F portfolio. The second most bullish fund manager is Renaissance Technologies, one of the largest hedge funds in the world, which holds a $64.8 million position; the fund has 0.1% of its 13F portfolio invested in the stock. Other hedge funds and institutional investors that hold long positions include Larry Petrellaáand Michael Siminerio’s PineView Asset Management, Cliff Asness’s AQR Capital Management and Jane Mendillo’s Harvard Management Co. We should note that none of these hedge funds are among our list of the 100 best performing hedge funds which is based on the performance of their 13F long positions in non-microcap stocks.