Is AMERCO (NASDAQ:UHAL) A Good Stock To Buy?

Hedge funds are not perfect. They have their bad picks just like everyone else. Facebook, a stock hedge funds have loved, lost a third of its value since the end of July. Although hedge funds are not perfect, their consensus picks do deliver solid returns, however. Our data show the top 30 S&P 500 stocks among hedge funds at the end of September 2018 yielded an average return of 6.7% year-to-date, vs. a gain of 2.6% for the S&P 500 Index. Because hedge funds have a lot of resources and their consensus picks do well, we pay attention to what they think. In this article, we analyze what the elite funds think of AMERCO (NASDAQ:UHAL).

Hedge fund interest in AMERCO (NASDAQ:UHAL) shares was flat at the end of last quarter. This is usually a negative indicator. With 8 smart money investors long the stock, Melco wasn’t one of the 30 most popular stocks among hedge funds. At the end of this article, we will also compare UHAL to other stocks including Flextronics International Ltd. (NASDAQ:FLEX), Chemours Co (NYSE:CC), and Apartment Investment and Management Co. (NYSE:AIV) to get a better sense of its popularity.

To most investors, hedge funds are perceived as unimportant, old financial tools of years past. While there are more than 8000 funds with their doors open at the moment, Our experts hone in on the elite of this group, approximately 700 funds. These hedge fund managers administer the majority of all hedge funds’ total asset base, and by following their first-class picks, Insider Monkey has brought to light numerous investment strategies that have historically beaten the market. Insider Monkey’s flagship hedge fund strategy beat the S&P 500 index by 6 percentage points a year since its inception in May 2014 through early November 2018. We were able to generate large returns even by identifying short candidates. Our portfolio of short stocks lost 26.1% since February 2017 even though the market was up nearly 19% during the same period. We just shared a list of 11 short targets in our latest quarterly update.

“While Amerco is not a household name, its largest and most valuable subsidiary, U-Haul International, is certainly well-known as it is the leading provider of self-moving services and supplies in North America with more than 150,000 trucks. 100,000 trailers, and 40,000 towing devices. In addition, the company has aggressively expanded into the self-storage business by adding storage facilities at its key locations over the past five years. As a result, Amerco now has nearly 30 million square feet of self-storage properties and controls one of the most valuable self-storage platforms in North America, further entrenching itself as the “go-to” provider of self-moving services by being able to offer reputable storage facilities alongside its other offerings.”

At the end of the third quarter, a total of 8 of the hedge funds tracked by Insider Monkey were bullish on this stock, a change of 0% from the second quarter of 2018. The graph below displays the number of hedge funds with a bullish position in UHAL over the last 13 quarters. With hedgies’ capital changing hands, there exists a select group of noteworthy hedge fund managers who were upping their stakes considerably (or already accumulated large positions). 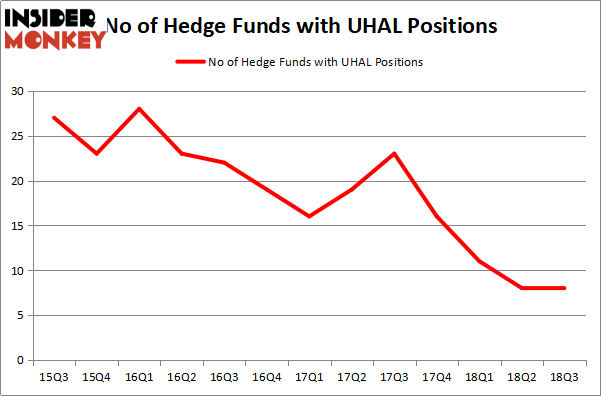 The largest stake in AMERCO (NASDAQ:UHAL) was held by Abrams Capital Management, which reported holding $205.4 million worth of stock at the end of September. It was followed by AQR Capital Management with a $76.8 million position. Other investors bullish on the company included Yacktman Asset Management, Harbor Spring Capital, and Third Avenue Management.

Since AMERCO (NASDAQ:UHAL) has witnessed falling interest from the entirety of the hedge funds we track, it’s safe to say that there were a few hedge funds that elected to cut their positions entirely in the third quarter. At the top of the heap, Quincy Lee’s Ancient Art (Teton Capital) sold off the biggest investment of all the hedgies tracked by Insider Monkey, valued at about $4.8 million in stock, and Peter Rathjens, Bruce Clarke and John Campbell’s Arrowstreet Capital was right behind this move, as the fund dumped about $1.1 million worth. These transactions are interesting, as aggregate hedge fund interest stayed the same (this is a bearish signal in our experience).

As you can see these stocks had an average of 25 hedge funds with bullish positions and the average amount invested in these stocks was $723 million. That figure was $409 million in UHAL’s case. The Chemours Company (NYSE:CC) is the most popular stock in this table. On the other hand Apartment Investment and Management Co. (NYSE:AIV) is the least popular one with only 18 bullish hedge fund positions. Compared to these stocks AMERCO (NASDAQ:UHAL) is even less popular than AIV. Considering that hedge funds aren’t fond of this stock in relation to other companies analyzed in this article, it may be a good idea to analyze it in detail and understand why the smart money isn’t behind this stock. This isn’t necessarily bad news. Although it is possible that hedge funds may think the stock is overpriced and view the stock as a short candidate, they may not be very familiar with the bullish thesis. In either case more research is warranted.