Is Amazon.com, Inc. (NASDAQ:AMZN) Going to Burn These Hedge Funds?

Concerns over rising interest rates and expected further rate increases have hit several stocks hard since the end of the third quarter. NASDAQ and Russell 2000 indices are already in correction territory. More importantly, Russell 2000 ETF (IWM) underperformed the larger S&P 500 ETF (SPY) by about 4 percentage points in the first half of the fourth quarter. Hedge funds and institutional investors tracked by Insider Monkey usually invest a disproportionate amount of their portfolios in smaller cap stocks. We have been receiving indications that hedge funds were paring back their overall exposure and this is one of the factors behind the recent movements in major indices. In this article, we will take a closer look at hedge fund sentiment towards Amazon.com, Inc. (NASDAQ:AMZN).

Is Amazon.com, Inc. (NASDAQ:AMZN) worth your attention right now? Investors who are in the know are getting more optimistic. The number of long hedge fund positions advanced by 13 recently, and Amazon.com Inc was in 150 hedge funds’ portfolios at the end of the third quarter of 2018. For years this stock has been among the most attractive ones, and this year is no different as it was the third among the 30 most popular stocks among hedge funds in Q3 of 2018. Furthermore, it has managed to captivate the wealthiest money managers out there, being the sixth among 30 stocks billionaires are crazy about: Insider Monkey billionaire stock index. But, what exactly does this mean? That you should jump right in and add it to your portfolio? Before making our final call on it, we would like to examine the stock more carefully.

To most shareholders, hedge funds are assumed to be slow, old investment tools of the past. While there are more than 8000 funds trading at present, Our researchers hone in on the bigwigs of this club, around 700 funds. These hedge fund managers administer the lion’s share of the smart money’s total capital, and by watching their inimitable stock picks, Insider Monkey has unsheathed various investment strategies that have historically exceeded the market. Insider Monkey’s flagship hedge fund strategy outstripped the S&P 500 index by 6 percentage points per year since its inception in May 2014 through early November 2018. We were able to generate large returns even by identifying short candidates. Our portfolio of short stocks lost 26.1% since February 2017 even though the market was up nearly 19% during the same period. We just shared a list of 11 short targets in our latest quarterly update.

While researching about Amazon.com Inc further we found River Park Large Growth Fund’s Third Quarter 2018 Performance Summary, in which it also discusses the stock, being one of its top performers in the third quarter. We bring you that part of its report:

“Amazon.com: AMZN shares were also a top contributor for the quarter as the company again produced a strong quarterly earnings report. Amazon reported 39% revenue growth for its June quarter to $53 billion with both core retail and its cloud computing Amazon Web Services (AWS) divisions exceeding expectations. As important, the company posted the largest quarterly profit in its history of $3 billion, up from only $600 million a year ago. Strong profit contributions came from core North American retail, AWS and the newer advertising segment (primarily selling ad space on websites). AWS was particularly impressive with 49% revenue growth (an acceleration from last quarter and last year) to $6 billion (to $21 billion of TTM sales) with segment operating margins of nearly 27% (up over 400 basis points from 2Q17).

Amazon’s advertising business segment was also a standout, growing 65% year-over-year to more than $2 billion of revenue. Amazon’s retail divisions continued their impressive growth, with North America sales up 44% and International up 27%.

While Amazon continues to invest heavily to drive its market leading positions in each of its businesses and in all geographic regions, the company also continues to grow operating income faster than its strong sales growth – operating margins grew 390 basis points year-over-year to 5.6%, well ahead of expectations. We believe that future sales and profit growth potential for the company remains exceptional and will continue to lead to dramatic increases in excess free cash flow over the longer term.”

Despite River Park’s optimism and good forecast of the company’s business, we are still not persuaded and we are going to continue with our analysis going over the fresh hedge fund action surrounding the stcok. 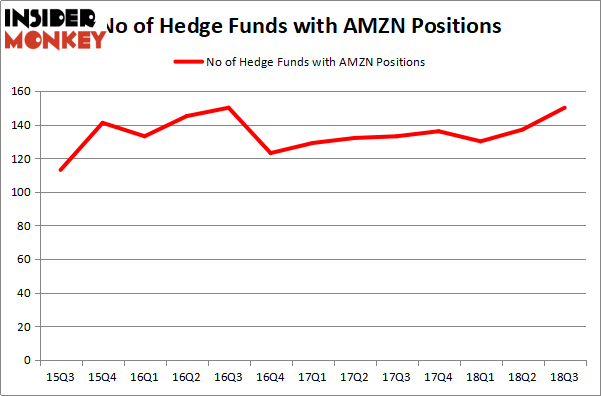 As you can see these stocks had an average of 130 hedge funds with bullish positions and the average amount invested in these stocks was $21.01 billion. That figure was $21.77 billion in AMZN’s case. Microsoft Corporation (NASDAQ:MSFT) is the most popular stock in this table. On the other hand Berkshire Hathaway Inc. (NYSE:BRK-B) is the least popular one with only 84 bullish hedge fund positions. Amazon.com, Inc. (NASDAQ:AMZN) is not the most popular stock in this group but hedge fund interest is still above average. This is a slightly positive signal but we’d rather spend our time researching stocks that hedge funds are piling on. In this regard MSFT might be a better candidate to consider a long position.

Best Performing Hedge Funds Strategy
Download a free copy of our newsletter and see the details inside!
Hedge Fund Resource Center
Related News
30 Stocks Billionaires Are Crazy About: Insider Monkey Billionaire Stock Index 10 Most Popular Tech Stocks Among Hedge Funds Billionaire Ken Fisher’s Top Stock Picks Heading Into 2019 Amazon, Pandora, PTC Therapeutics, and More: Why These Stocks Are Trending Facebook, Google, Amazon, and More: Why These Stocks Are in the Spotlight Here is What Hedge Funds Think About Amazon.com, Inc. (AMZN) 25 Most Popular Stocks Among Hedge Funds in 2018 5 Ways You Can Eliminate Credit Card Debt 10 Easiest Road Test Sites in NY and NJ 10 Hottest Selling Products in the USA in 2018
Billionaire Hedge Funds