Altria Group Inc (NYSE:MO) was in 41 hedge funds’ portfolios at the end of September. MO has experienced an increase in activity from the world’s largest hedge funds in recent months. There were 35 hedge funds in our database with MO holdings at the end of the previous quarter. Our calculations also showed that MO isn’t among the 30 most popular stocks among hedge funds.

What have hedge funds been doing with Altria Group Inc (NYSE:MO)? 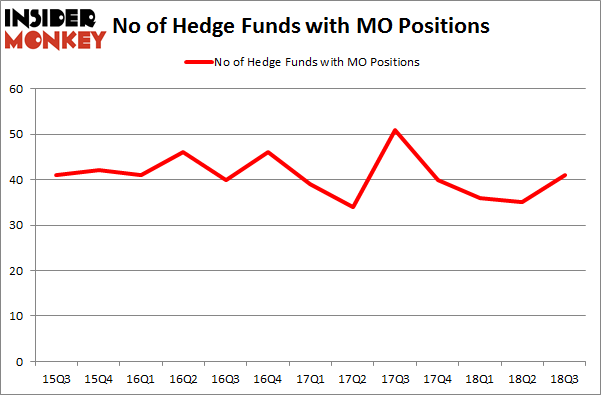 More specifically, Gardner Russo & Gardner was the largest shareholder of Altria Group Inc (NYSE:MO), with a stake worth $328.6 million reported as of the end of September. Trailing Gardner Russo & Gardner was Two Sigma Advisors, which amassed a stake valued at $228.1 million. Citadel Investment Group, Adage Capital Management, and Polar Capital were also very fond of the stock, giving the stock large weights in their portfolios.

As one would reasonably expect, some big names have been driving this bullishness. Soros Fund Management, managed by George Soros, assembled the largest position in Altria Group Inc (NYSE:MO). Soros Fund Management had $10.6 million invested in the company at the end of the quarter. Bruce Kovner’s Caxton Associates LP also made a $6 million investment in the stock during the quarter. The other funds with brand new MO positions are Lee Ainslie’s Maverick Capital, Glenn Russell Dubin’s Highbridge Capital Management, and Paul Tudor Jones’s Tudor Investment Corp.

As you can see these stocks had an average of 30 hedge funds with bullish positions and the average amount invested in these stocks was $2.84 billion. That figure was $1.33 billion in MO’s case. United Technologies Corporation (NYSE:UTX) is the most popular stock in this table. On the other hand Novo Nordisk A/S (NYSE:NVO) is the least popular one with only 17 bullish hedge fund positions. Altria Group Inc (NYSE:MO) is not the most popular stock in this group but hedge fund interest is still above average. This is a slightly positive signal but we’d rather spend our time researching stocks that hedge funds are piling on. In this regard UTX might be a better candidate to consider a long position.

Is PotlatchDeltic Corporation (PCH) A Good Stock To Buy?
Monthly Newsletter Strategy
Download a free copy of our newsletter and see the details inside!
Hedge Fund Resource Center
Related News
Altria Group (MO) vs. Philip Morris (PM): Hedge Funds Have a Clear Favorite 25 Best Dividend Stocks for Retirement 4 Bargain-Priced Dividend Stocks Near 52-Week Lows 11 Best Selling Cigarette Brands In US Top 10 Biggest Tobacco Companies in the World in 2017 This Hedge Fund Manager Thinks The Market May Increase 30% By December 2018 11 Most Profitable Companies In America in 2017 The 10 Best Islands to Visit in 2019 5 Most Socially Responsible Companies in America 5 Ways You Can Eliminate Credit Card Debt
Billionaire Hedge Funds