Is Align Technology, Inc. (ALGN) A Good Stock To Buy?

As we already know from media reports and hedge fund investor letters, many hedge funds lost money in fourth quarter, blaming macroeconomic conditions and unpredictable events that hit several sectors, with technology among them. Nevertheless, most investors decided to stick to their bullish theses and recouped their losses by the end of the first quarter. We get to see hedge funds’ thoughts towards the market and individual stocks by aggregating their quarterly portfolio movements and reading their investor letters. In this article, we will particularly take a look at what hedge funds think about Align Technology, Inc. (NASDAQ:ALGN).

Align Technology, Inc. (NASDAQ:ALGN) was in 30 hedge funds’ portfolios at the end of the first quarter of 2019. ALGN has experienced a decrease in activity from the world’s largest hedge funds of late. There were 37 hedge funds in our database with ALGN holdings at the end of the previous quarter. Our calculations also showed that algn isn’t among the 30 most popular stocks among hedge funds.

What have hedge funds been doing with Align Technology, Inc. (NASDAQ:ALGN)?

At Q1’s end, a total of 30 of the hedge funds tracked by Insider Monkey were long this stock, a change of -19% from the previous quarter. By comparison, 38 hedge funds held shares or bullish call options in ALGN a year ago. With hedge funds’ positions undergoing their usual ebb and flow, there exists an “upper tier” of notable hedge fund managers who were upping their stakes meaningfully (or already accumulated large positions). 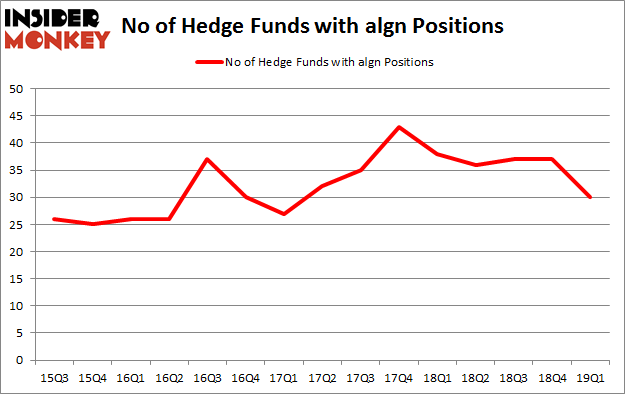 More specifically, Renaissance Technologies was the largest shareholder of Align Technology, Inc. (NASDAQ:ALGN), with a stake worth $642.6 million reported as of the end of March. Trailing Renaissance Technologies was Viking Global, which amassed a stake valued at $510.7 million. Balyasny Asset Management, Citadel Investment Group, and Partner Fund Management were also very fond of the stock, giving the stock large weights in their portfolios.

Seeing as Align Technology, Inc. (NASDAQ:ALGN) has experienced declining sentiment from hedge fund managers, it’s safe to say that there lies a certain “tier” of fund managers that decided to sell off their positions entirely last quarter. At the top of the heap, Eashwar Krishnan’s Tybourne Capital Management dropped the biggest stake of all the hedgies followed by Insider Monkey, valued at about $215.8 million in stock. Principal Global Investors’s fund, Columbus Circle Investors, also cut its stock, about $11 million worth. These bearish behaviors are interesting, as total hedge fund interest was cut by 7 funds last quarter.

As you can see these stocks had an average of 49.75 hedge funds with bullish positions and the average amount invested in these stocks was $2671 million. That figure was $1757 million in ALGN’s case. Fox Corporation (NASDAQ:FOXA) is the most popular stock in this table. On the other hand Willis Towers Watson Public Limited Company (NASDAQ:WLTW) is the least popular one with only 33 bullish hedge fund positions. Compared to these stocks Align Technology, Inc. (NASDAQ:ALGN) is even less popular than WLTW. Hedge funds clearly dropped the ball on ALGN as the stock delivered strong returns, though hedge funds’ consensus picks still generated respectable returns. Our calculations showed that top 20 most popular stocks among hedge funds returned 1.9% in Q2 through May 30th and outperformed the S&P 500 ETF (SPY) by more than 3 percentage points. A small number of hedge funds were also right about betting on ALGN as the stock returned 4.3% during the same period and outperformed the market by an even larger margin.