Is Alder Biopharmaceuticals Inc (ALDR) A Good Stock To Buy?

At Insider Monkey, we pore over the filings of more than 700 top investment firms every quarter, a process we have now completed for the latest reporting period. The data we’ve gathered as a result gives us access to a wealth of collective knowledge based on these firms’ portfolio holdings as of September 30. In this article, we will use that wealth of knowledge to determine whether or not Alder Biopharmaceuticals Inc (NASDAQ:ALDR) makes for a good investment right now.

Alder Biopharmaceuticals Inc (NASDAQ:ALDR) was in 16 hedge funds’ portfolios at the end of September. ALDR investors should be aware of a decrease in enthusiasm from smart money of late. There were 19 hedge funds in our database with ALDR holdings at the end of the previous quarter. Our calculations also showed that ALDR isn’t among the 30 most popular stocks among hedge funds.

What have hedge funds been doing with Alder Biopharmaceuticals Inc (NASDAQ:ALDR)?

At the end of the third quarter, a total of 16 of the hedge funds tracked by Insider Monkey were long this stock, a change of -16% from one quarter earlier. The graph below displays the number of hedge funds with bullish position in ALDR over the last 13 quarters. With hedgies’ capital changing hands, there exists a select group of noteworthy hedge fund managers who were boosting their stakes meaningfully (or already accumulated large positions). 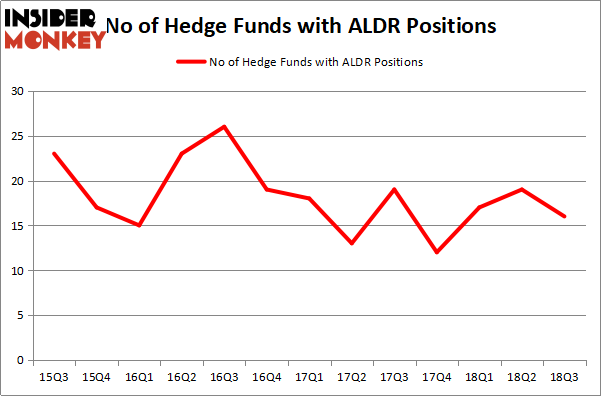 The largest stake in Alder Biopharmaceuticals Inc (NASDAQ:ALDR) was held by Redmile Group, which reported holding $108.3 million worth of stock at the end of September. It was followed by Foresite Capital with a $49 million position. Other investors bullish on the company included Citadel Investment Group, Partner Fund Management, and Samlyn Capital.

Due to the fact that Alder Biopharmaceuticals Inc (NASDAQ:ALDR) has witnessed falling interest from the smart money, logic holds that there was a specific group of funds who were dropping their positions entirely last quarter. It’s worth mentioning that Peter Muller’s PDT Partners dropped the biggest investment of all the hedgies followed by Insider Monkey, comprising an estimated $2 million in stock, and Steve Cohen’s Point72 Asset Management was right behind this move, as the fund said goodbye to about $2 million worth. These transactions are intriguing to say the least, as total hedge fund interest was cut by 3 funds last quarter.

As you can see these stocks had an average of 11.25 hedge funds with bullish positions and the average amount invested in these stocks was $107 million. That figure was $360 million in ALDR’s case. The Buckle, Inc. (NYSE:BKE) is the most popular stock in this table. On the other hand Chase Corporation (NYSEAMEX:CCF) is the least popular one with only 6 bullish hedge fund positions. Compared to these stocks Alder Biopharmaceuticals Inc (NASDAQ:ALDR) is more popular among hedge funds. Considering that hedge funds are fond of this stock in relation to its market cap peers, it may be a good idea to analyze it in detail and potentially include it in your portfolio.