Agrium Inc. (USA) (NYSE:AGU), the global producer, marketer, and distributor of nutrients for agricultural and industrial markets, recently reported financial results for the fourth quarter of 2012. It ended the year with pretty solid numbers, but plunged on news of a recent downgrade from Dahlman Rose. The agriculture stock analyst spoiled the party for Agrium’s longtime investors, urging them to get rid of their shares. Is this company still worth owning?

A company’s success is based upon sturdy sales growth. For Agrium Inc. (USA) (NYSE:AGU), the real money-spinner is its extensive retail facilities network, and business units that cross the entire agricultural value-chain.

In 2012, the company reached almost $16.9 billion worth of sales, up by 7.8% compared to the previous year. Overall, for the past five years, Agrium has been delivering consistent top-line results, outperforming most of its peers. Thus, it is the hands-down winner in the revenue race, leaving behind CF Industries Holdings, Inc. (NYSE:CF), Potash Corp./Saskatchewan (USA) (NYSE:POT), and Mosaic Co (NYSE:MOS). The chart below is worth a thousand words: 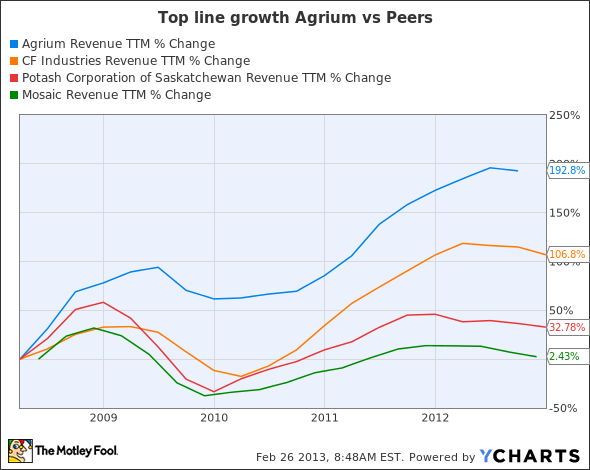 Nonetheless, at the end of the day, what matters the most is the bottom figure in the income statement. In other words, how much did the company earn after paying all of its bills? Over the short term, the stock price fluctuates based on everything from investor sentiment to the weather. Over the long term what makes all the difference are earnings.

Individually, Agrium has managed to support a robust earnings growth. However, compared to its peers, it is losing the lead to CF Industries: 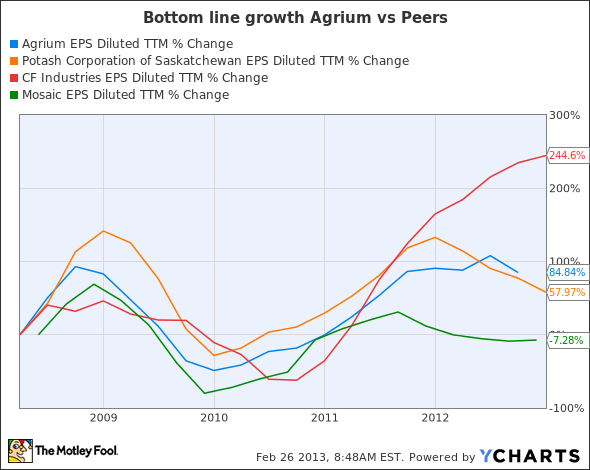 Cash is King, but shareholders’ value is everything

Agrium ended 2012 with less cash and cash equivalents compared to the prior year. Yet the big picture shows a clean balance sheet. Agrium’s current ratio, a useful tool for measuring liquidity, stands at 1.87. It might be lower than Mosaic’s same ratio of roughly 4, but still, it is sufficient to meet near-term operating needs. Moreover, the company’s debt-to-equity ratio of 0.21 suggests that Agrium has been using debt but not to a point where a financial hiccup could cause catastrophic distortions.

Most importantly, despite the year-over-year decline in cash and cash equivalents, total current assets exceeded total current liabilities by more than $3 billion. This differential (also known as working capital) is the lifeblood of every business; it provides safety for bad times and it can be used to increase shareholders value. As of the end of 2012, Agrium’s working capital was pretty nifty, considering that long-term debt was somewhat above $2 billion.

However, i f we measure this surplus against the total market value of all Agrium outstanding shares, plus its long-term debt, we get some dubious results. Less than 20% of Agrium’s market capitalization is backed up by its working capital. Anything above 50% would mean that the company’s coffers are filled with cold, hard cash. Additionally, if you were to liquidate it right away, you would get $0.50 on the dollar from working capital alone.

This does not mean that Agrium is on the verge of a liquidity shortage. In 2012, the company killed two birds with one stone; it fulfilled its short-term obligations and used part of its cash reserves to increase its dividends and complete a share buyback.