Is AFLAC Incorporated (AFL) A Good Stock To Buy?

Is AFLAC Incorporated (NYSE:AFL) going to take off soon? Hedge funds are getting more optimistic. The number of long hedge fund positions increased by 6 lately. Our calculations also showed that AFL isn’t among the 30 most popular stocks among hedge funds. 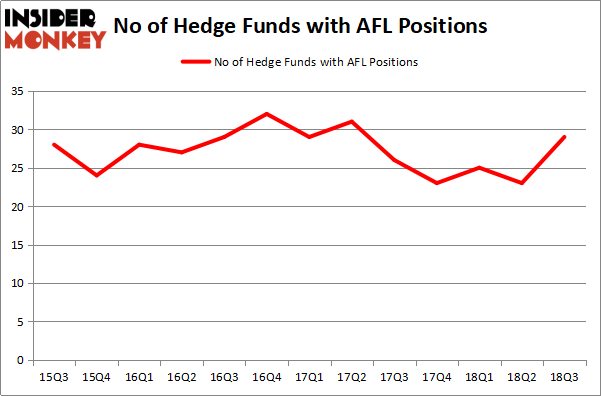 Among these funds, AQR Capital Management held the most valuable stake in AFLAC Incorporated (NYSE:AFL), which was worth $589.8 million at the end of the third quarter. On the second spot was Ariel Investments which amassed $103.7 million worth of shares. Moreover, Two Sigma Advisors, Adage Capital Management, and Arrowstreet Capital were also bullish on AFLAC Incorporated (NYSE:AFL), allocating a large percentage of their portfolios to this stock.

As industrywide interest jumped, some big names were leading the bulls’ herd. Renaissance Technologies, managed by Jim Simons, assembled the biggest position in AFLAC Incorporated (NYSE:AFL). Renaissance Technologies had $12.4 million invested in the company at the end of the quarter. William Harnisch’s Peconic Partners LLC also initiated a $2.4 million position during the quarter. The other funds with new positions in the stock are Andrew Feldstein and Stephen Siderow’s Blue Mountain Capital, David Costen Haley’s HBK Investments, and James Dondero’s Highland Capital Management.

View table here if you experience formatting issues.
As you can see these stocks had an average of 37.25 hedge funds with bullish positions and the average amount invested in these stocks was $3.0 trillion. That figure was $923 million in AFL’s case. Marathon Petroleum Corp (NYSE:MPC) is the most popular stock in this table. On the other hand China Unicom (Hong Kong) Limited (NYSE:CHU) is the least popular one with only 6 bullish hedge fund positions. AFLAC Incorporated (NYSE:AFL) is not the least popular stock in this group but hedge fund interest is still below average. This is a slightly negative signal and we’d rather spend our time researching stocks that hedge funds are piling on. In this regard MPC might be a better candidate to consider a long position.