Is Acorda Therapeutics Inc (ACOR) A Good Stock To Buy?

The fourth quarter was a rough one for most investors, as fears of a rising interest rate environment in the U.S, a trade war with China, and a more or less stagnant Europe, weighed heavily on the minds of investors. Both the S&P 500 and Russell 2000 sank as a result, with the Russell 2000, which is composed of smaller companies, being hit especially hard. This was primarily due to hedge funds, which are big supporters of small-cap stocks, pulling some of their capital out of the volatile markets during this time. Let’s look at how this market volatility affected the sentiment of hedge funds towards Acorda Therapeutics Inc (NASDAQ:ACOR), and what that likely means for the prospects of the company and its stock.

Hedge fund interest in Acorda Therapeutics Inc (NASDAQ:ACOR) shares was flat at the end of last quarter. This is usually a negative indicator. The level and the change in hedge fund popularity aren’t the only variables you need to analyze to decipher hedge funds’ perspectives. A stock may witness a boost in popularity but it may still be less popular than similarly priced stocks. That’s why at the end of this article we will examine companies such as Denny’s Corporation (NASDAQ:DENN), Kelly Services, Inc. (NASDAQ:KELYA), and InfraREIT Inc (NYSE:HIFR) to gather more data points.

What have hedge funds been doing with Acorda Therapeutics Inc (NASDAQ:ACOR)? 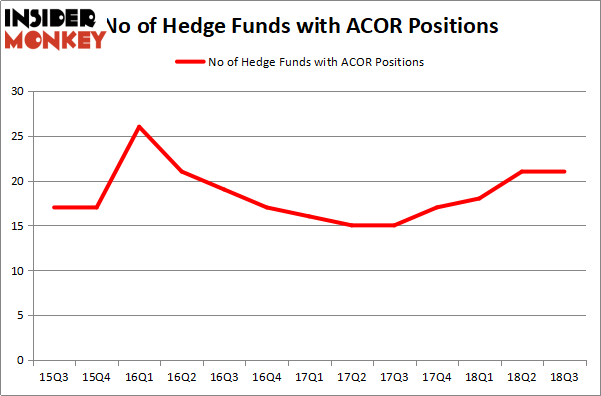 Of the funds tracked by Insider Monkey, Matt Sirovich and Jeremy Mindich’s Scopia Capital has the largest position in Acorda Therapeutics Inc (NASDAQ:ACOR), worth close to $139.7 million, corresponding to 2.7% of its total 13F portfolio. The second largest stake is held by Christopher James of Partner Fund Management, with a $33.4 million call position; the fund has 0.5% of its 13F portfolio invested in the stock. Some other professional money managers with similar optimism contain Jim Simons’s Renaissance Technologies, Christopher James’s Partner Fund Management and Israel Englander’s Millennium Management.

Because Acorda Therapeutics Inc (NASDAQ:ACOR) has experienced declining sentiment from the entirety of the hedge funds we track, it’s easy to see that there lies a certain “tier” of hedgies that elected to cut their positions entirely in the third quarter. Intriguingly, Julian Baker and Felix Baker’s Baker Bros. Advisors dropped the biggest investment of the “upper crust” of funds monitored by Insider Monkey, totaling close to $5 million in call options, and Jeffrey Jay and David Kroin’s Great Point Partners was right behind this move, as the fund said goodbye to about $4.2 million worth. These bearish behaviors are interesting considering the fact that ACOR’s biggest holder Scopia Capital reported selling more then 600K shares the stock at prices as low as $16.

As you can see these stocks had an average of 11 hedge funds with bullish positions and the average amount invested in these stocks was $67 million. That figure was $226 million in ACOR’s case. Denny’s Corporation (NASDAQ:DENN) is the most popular stock in this table. On the other hand Kenon Holdings Ltd. (NYSE:KEN) is the least popular one with only 1 bullish hedge fund positions. Acorda Therapeutics Inc (NASDAQ:ACOR) is not the most popular stock in this group. Its biggest holder has been dumping ACOR shares in recent days and actually a large number of hedge funds are shorting the stock (more than 8 million shares of ACOR are sold short at the end of November). As a result, we don’t think ACOR is a good stock to buy right now and we may be inclined to short it.