Insider Monkey has processed numerous 13F filings of hedge funds and successful value investors to create an extensive database of hedge fund holdings. The 13F filings show the hedge funds’ and successful investors’ positions as of the end of the third quarter. You can find articles about an individual hedge fund’s trades on numerous financial news websites. However, in this article we will take a look at their collective moves over the last 4 years and analyze what the smart money thinks of Acme United Corporation (NYSE:ACU) based on that data.

Hedge fund interest in Acme United Corporation (NYSE:ACU) shares was flat at the end of last quarter. This is usually a negative indicator. The level and the change in hedge fund popularity aren’t the only variables you need to analyze to decipher hedge funds’ perspectives. A stock may witness a boost in popularity but it may still be less popular than similarly priced stocks. That’s why at the end of this article we will examine companies such as 180 Degree Capital Corp. (NASDAQ:TURN), RF Industries, Ltd. (NASDAQ:RFIL), and RumbleOn, Inc. (NASDAQ:RMBL) to gather more data points. Our calculations also showed that ACU isn’t among the 30 most popular stocks among hedge funds.

Unlike the largest US hedge funds that are convinced Dow will soar past 40,000 or the world’s most bearish hedge fund that’s more convinced than ever that a crash is coming, our long-short investment strategy doesn’t rely on bull or bear markets to deliver double digit returns. We only rely on the best performing hedge funds‘ buy/sell signals. Let’s take a peek at the latest hedge fund action encompassing Acme United Corporation (NYSE:ACU).

What have hedge funds been doing with Acme United Corporation (NYSE:ACU)? 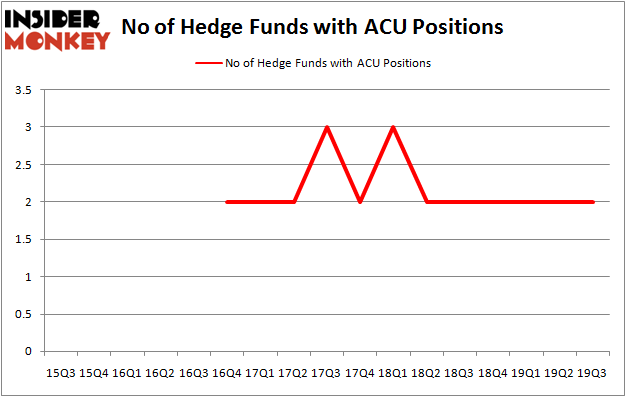 According to Insider Monkey’s hedge fund database, Renaissance Technologies has the most valuable position in Acme United Corporation (NYSE:ACU), worth close to $3.4 million, accounting for less than 0.1%% of its total 13F portfolio. Sitting at the No. 2 spot is Chuck Royce of Royce & Associates, with a $2.6 million position; the fund has less than 0.1%% of its 13F portfolio invested in the stock. In terms of the portfolio weights assigned to each position Royce & Associates allocated the biggest weight to Acme United Corporation (NYSE:ACU), around 0.02% of its portfolio. Renaissance Technologies is also relatively very bullish on the stock, setting aside 0.0029 percent of its 13F equity portfolio to ACU.

As you can see these stocks had an average of 4.5 hedge funds with bullish positions and the average amount invested in these stocks was $11 million. That figure was $6 million in ACU’s case. Global Eagle Entertainment Inc. (NASDAQ:ENT) is the most popular stock in this table. On the other hand 180 Degree Capital Corp. (NASDAQ:TURN) is the least popular one with only 2 bullish hedge fund positions. Compared to these stocks Acme United Corporation (NYSE:ACU) is even less popular than TURN. Hedge funds clearly dropped the ball on ACU as the stock delivered strong returns, though hedge funds’ consensus picks still generated respectable returns. Our calculations showed that top 20 most popular stocks among hedge funds returned 34.7% in 2019 through November 22nd and outperformed the S&P 500 ETF (SPY) by 8.5 percentage points. A small number of hedge funds were also right about betting on ACU as the stock returned 12% during the fourth quarter (through 11/22) and outperformed the market by an even larger margin.

Is WellCare Health Plans, Inc. (WCG) A Good Stock To Buy?
Monthly Newsletter Strategy
Download a free copy of our newsletter and see the details inside!
Hedge Fund Resource Center
Related News
10 Easiest Popular Songs to Play on Piano 10 Human Trafficking Stories in America 10 Easiest Instruments For Adults To Learn On Their Own
Billionaire Hedge Funds