Is 3M Company (MMM) A Good Stock To Buy?

Is 3M Company (NYSE:MMM) a good stock to buy right now? We at Insider Monkey like to examine what billionaires and hedge funds think of a company before doing days of research on it. Given their 2 and 20 payment structure, hedge funds have more resources than the average investor. The funds have access to expert networks and get tips from industry insiders. They also have numerous Ivy League graduates and MBAs. Like everyone else, hedge funds perform miserably at times, but their consensus picks have historically outperformed the market after risk adjustments.

3M Company (NYSE:MMM) was in 34 hedge funds’ portfolios at the end of the third quarter of 2018. MMM has seen an increase in support from the world’s most elite money managers in recent months. There were 33 hedge funds in our database with MMM positions at the end of the previous quarter. Our calculations also showed that MMM isn’t among the 30 most popular stocks among hedge funds.

What does the smart money think about 3M Company (NYSE:MMM)? 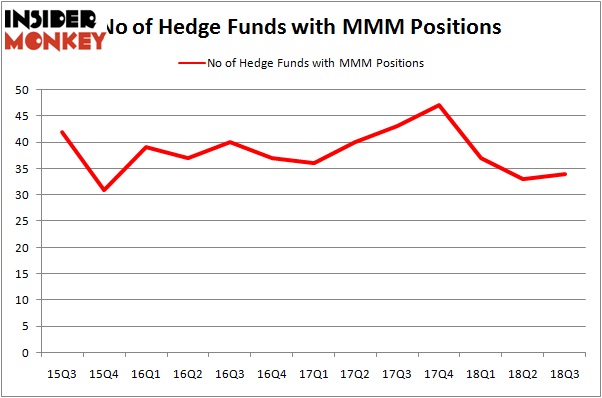 As you can see these stocks had an average of 49.75 hedge funds with bullish positions and the average amount invested in these stocks was $3.32 billion. That figure was $356 million in MMM’s case. salesforce.com, inc. (NYSE:CRM) is the most popular stock in this table. On the other hand China Petroleum & Chemical Corp (NYSE:SNP) is the least popular one with only 13 bullish hedge fund positions. 3M Company (NYSE:MMM) is not the least popular stock in this group but hedge fund interest is still below average. This is a slightly negative signal and we’d rather spend our time researching stocks that hedge funds are piling on. In this regard CRM might be a better candidate to consider a long position.

Hedge Funds Aren’t Crazy About Raytheon Company (RTN) Anymore
Monthly Newsletter Strategy
Download a free copy of our newsletter and see the details inside!
Hedge Fund Resource Center
Related News
The Threat And Risk Of Rising Interest Rates: Separating Fact From Fiction Here’s Why Traders Are Watching AXT Inc, Barrick Gold, 3M, and More Today 10 Most Ethical Companies In The US Seven Dividend Stocks Rewarding Shareholders With A Raise Three Of My Favorite Dividend Stocks For 2017 Should You Buy 3M Co (MMM)? Building A Core Dividend Growth Portfolio With These Eight Companies The 10 Best Islands to Visit in 2019 5 Most Socially Responsible Companies in America 5 Ways You Can Eliminate Credit Card Debt
Billionaire Hedge Funds