We at Insider Monkey have gone over 700 13F filings that hedge funds and prominent investors are required to file by the SEC The 13F filings show the funds’ and investors’ portfolio positions as of September 30th. In this article, we look at what those funds think of Iron Mountain Incorporated (NYSE:IRM) based on that data.

Is Iron Mountain Incorporated (NYSE:IRM) a splendid investment right now? Prominent investors are betting on the stock. The number of bullish hedge fund bets went up by 6 recently. Our calculations also showed that irm isn’t among the 30 most popular stocks among hedge funds. IRM was in 20 hedge funds’ portfolios at the end of the third quarter of 2018. There were 14 hedge funds in our database with IRM positions at the end of the previous quarter.

In the eyes of most market participants, hedge funds are perceived as underperforming, outdated investment tools of yesteryear. While there are over 8,000 funds trading at present, Our experts look at the bigwigs of this group, about 700 funds. Most estimates calculate that this group of people direct most of the smart money’s total capital, and by tracking their highest performing stock picks, Insider Monkey has identified several investment strategies that have historically surpassed the broader indices. Insider Monkey’s flagship hedge fund strategy defeated the S&P 500 index by 6 percentage points a year since its inception in May 2014 through early November 2018. We were able to generate large returns even by identifying short candidates. Our portfolio of short stocks lost 24% since February 2017 (through December 3rd) even though the market was up nearly 23% during the same period. We just shared a list of 11 short targets in our latest quarterly update.

What have hedge funds been doing with Iron Mountain Incorporated (NYSE:IRM)?

Heading into the fourth quarter of 2018, a total of 20 of the hedge funds tracked by Insider Monkey were bullish on this stock, a change of 43% from one quarter earlier. On the other hand, there were a total of 18 hedge funds with a bullish position in IRM at the beginning of this year. With the smart money’s sentiment swirling, there exists a select group of noteworthy hedge fund managers who were adding to their stakes significantly (or already accumulated large positions). 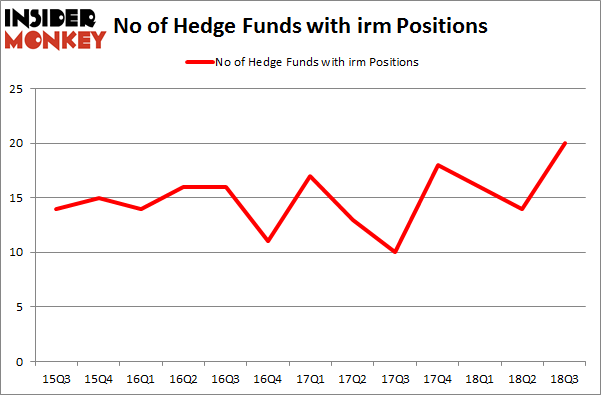 When looking at the institutional investors followed by Insider Monkey, Thomas Bancroft’s Makaira Partners has the number one position in Iron Mountain Incorporated (NYSE:IRM), worth close to $63.2 million, corresponding to 6.6% of its total 13F portfolio. Sitting at the No. 2 spot is Adage Capital Management, led by Phill Gross and Robert Atchinson, holding a $12.8 million position; less than 0.1%% of its 13F portfolio is allocated to the stock. Remaining professional money managers that hold long positions contain Ken Griffin’s Citadel Investment Group, Jim Simons’s Renaissance Technologies and Ken Griffin’s Citadel Investment Group.

As you can see these stocks had an average of 23 hedge funds with bullish positions and the average amount invested in these stocks was $1.05 billion. That figure was $107 million in IRM’s case. Nielsen Holdings plc (NYSE:NLSN) is the most popular stock in this table. On the other hand Huaneng Power International Inc (NYSE:HNP) is the least popular one with only 4 bullish hedge fund positions. Iron Mountain Incorporated (NYSE:IRM) is not the least popular stock in this group but hedge fund interest is still below average. This is a slightly negative signal and we’d rather spend our time researching stocks that hedge funds are piling on. In this regard NLSN might be a better candidate to consider a long position.