IOTA Hasn’t Lived Up to Expectations, Here’s What Another IoT Blockchain Has Learnt from Its Mistakes

Published on August 28, 2018 at 11:30 am by Insider Monkey Staff in Bitcoin, Ethereum and Other Cryptocurrencies, News, Tech

When IOTA debuted in 2017, it held incredible promise in its proposed ability to redefine trust, value, and ownership that will drive the economy of value through the Internet-of-Things. IOTA’s vision is very simple, it seeks to be a platform that enables all connected devices to be a part of a real-time data-sharing economy though a blockchain-powered verification of truth and transactional settlements.

Some of the great things that IOTA promised include zero transaction fees on its network, ability to process any type of data, and near-instant transactions. In addition, IOTA said it didn’t need mining because everybody contributes to the network and it hopes to be able to scale without limitations. IOTA’s huge promises have earned it a position as the 10th biggest cryptocurrency in the world with a market cap of $1.69B. During the crypto bull run of 2017, IOTA soared by as much as %695 from $0.63 on June 13 to $5.01 on December 20. However, IOTA hasn’t lived up to expectations both as a coin and even in the real-life applications of its project. 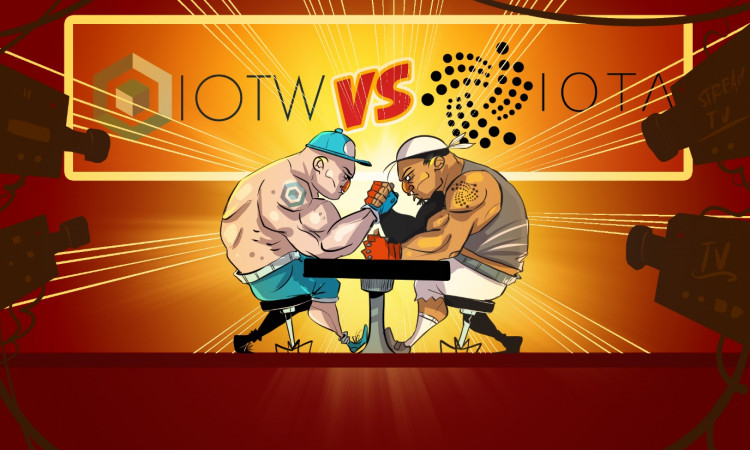 Here’s why IOTA hasn’t lived up to expectations

One of the biggest problems delaying the mass-market adoption of IOTA is that the market still doesn’t trust it enough. To begin with, IOTA is not using a blockchain in the real sense of the word; instead, it is using a Tangle – that choice caused a big Twitter fight between Ethereum’s core developer Nick Johnson and IOTA co-founder, David Sønstebø  late last year. IOTA still remains largely centralized – a huge turn off the decentralized message of blockchain technology.

IOTA hasn’t been able to gain mass-market adoption because of the negativity surrounding it as a cryptocurrency without a blockchain. Interestingly, IOTW might be able to succeed where IOTA is failing in that it coming to the market with a blockchain architecture in which end-nodes and trusted-nodes are separated. With the new architecture, most of the IoT devices in the world can become part of a blockchain ecosystem, activate machine-to-machine communication, and become micro-mining software for the cryptocurrency. The new architecture also has a “Micro-mining” protocol layers on a Proof-of-Assignment protocol to help device owners earns IOTW tokens.

IOTA currently uses a Coordinator protocol to validate transactions – The Coordinator is run by IOTA foundation and it is designed to protect the network until it grows robust enough to withstand attacks. The problem however is that The Coordinator itself is at risk, a deliberate attack would see someone amassing 33% of the hashpower of the network.

Another problem is that IOTA is at the risk of double-spend attacks from The Coordinator itself if a malevolent player lays hold of a compromised coordinator private key. The Coordinator could on going rouge present two separate milestones with identical index numbers to technically split the network into two parts. The attack could be sustained by incremental records on both networks to prevent one sub-tangle from overtaking the other and causing a convergence of the network.

Another problem is that IOTA boasts that it can scale effortlessly because it is robust enough to handle transactions as they happen. In reality however, users don’t want promises on transaction speeds or scalability—they want proof that a network is robust enough to handle surges as its use case increases. On IOTW, transactions are processed in less than 1 second, the IOTW blockchain is currently running on more than 1000 IoT devices simultaneously with a single Trust Node. The best part is that the IOTW team says that they are working towards enhancing target performance to handle 1 million transactions per second.

Another factor that has delayed the mass-market adoption of IOTA is that users are not willing to incur additional expenses required to implement the protocol on would-be IOTA devices. Hence, the go-to market strategy of IOTA is dependent on the hopes that it will become the leading DAG-powered IoT protocol and then, OEMs will start outfitting their appliances with the capability to join the network.

IOTW has a better go-to market strategy since it doesn’t require users to buy new devices or incur add-on expenses before they can connect their devices to its platform.  Users only need to activate a firmware upgrade on their existing devices to connect to IOTW’s platform. Hence, one could argue that IOTW might be able to record a faster pace to mass-market adoption going forward.