Wind power is one of the most prevalent forms of alternative energy in the world, as numerous countries have taken major steps towards weening themselves off of fossil fuels. Currently, wind power amounts to just over 2% of the world’s energy supply, but at current robust growth rates, this figure is predicted to hit 8% by 2018. From the years 2000 to 2011, global wind power capacity has increased from just 17.4 GW to 239 GW, representing a 1,274% change, as this budding industry is enjoying exponential growth in technology. While wind energy companies have yet to recover from the financial crisis, the investor who gets into this market before it kicks off again could reap the benefits [for more wind news and analysis subscribe to our free newsletter].

Wind power is actually a form of solar power, since wind is the movement of air molecules from high pressure to low pressure, which is caused by the sun. The sun unevenly heats the surface of the earth, creating a massive variety of air pressures in different geographical locations. One of the biggest attractions to this industry is the fact that wind power is free; once the operation is funded and put in place, there are no further costs outside of maintenance and upkeep of the turbines. However, this power source is not without its downsides as a great deal of noise is emitted by the machines; some can be as loud as a small jet engine and a major hassle to local residents. The turbines are also variable; if the wind is not blowing, the turbines are not generating new electricity, making them somewhat risky for utilities who need to provide customers with a constant stream of power. Problems in the short term arise when modelling more than 20% of US energy supplied from wind farms [see also Why Alternative Energy Will Never Become Widespread(In Our Lifetime)].

Wind power’s output is measured in watts, and can often be quoted in kilowatts, megawatts, and gigawatts. As a reference point, one gigawatt of energy is equal to one billion watts. According to a 2007 report form the U.S. Energy Information Administration, the average home uses 11,232 kilowatt hours of energy on an annual basis, though estimates vary across the board. This means that one gigawatt is enough energy to power roughly 90,000 homes for a year, and the current 239 gigawatts through out the world is enough to power roughly 21.5 million homes across the globe.

The top wind producer comes from China, as the emerging nation is taking great strides to incorporatealternative energy into their economy. This may pay off dividends later, as it is much easier to develop alternative energy along with an economy than it is for a major developed nation like the U.S. to ween itself off of a crude addiction. For the most part, however, the list of wind producers is a who’s-who of developed markets, with Europe dominating the space [see also The Guide To The Biggest Companies In Every Major Commodity Sector]. 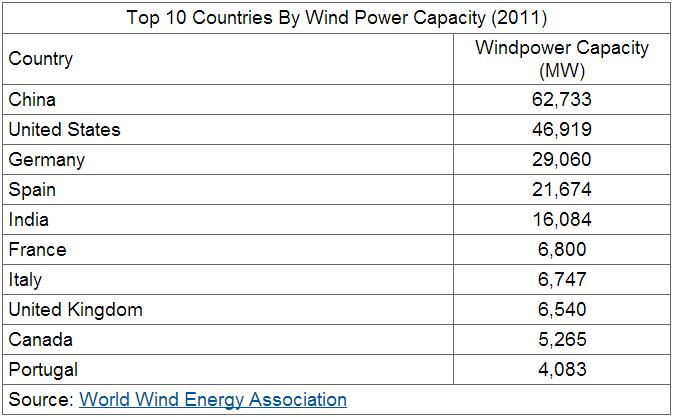 As a global commodity, the price of production as well as overall capacity is impacted by a number of factors, and is often subject to significant price swings in a relatively short period of time. The major price drivers of wind power include:

Wind’s appeal as an investment stems from its wide use throughout the globe. As such a popular commodity with such a strong growth outlook, investors can use wind power to make plays against strong and weak economies. An investment in wind power can also be used to make a play on weather conditions or to hedge against crude oil and natural gas. However, wind power companies have struggled ever since the financial crisis when investing dried up. Since then investors have yet to return and wind power companies and ETPs are at record low prices, as are most companies or funds that have to do with alternative energy[see also 5 Effective ETFs to Hedge a Frothy Stock Market].

A number of wind companies lie outside of the U.S. and are therefore listed on foreign exchanges. While there are still domestic options for investors, moving outside of U.S. equities is most likely your best bet for wind exposure.

While direct investment in wind is impossible, there are several ETFs that offer exposure to the underlying industry, giving investors broad exposure to the industry through a single ticker. This method looks to help investors diversify away company specific risk but could also drag down overall returns as well. The two options for wind power ETFs include: