Investing In Gold: The Definitive Guide

Gold is one of the rarest metals in the world, and has a long history as a valuable and intensely sought-after element. The precious metal has served as the basis for physical currency for thousands of years, and many monetary systems throughout human history have utilized a gold standard that focused on the precious metal. Exploration and production of gold has become a major industry in regions that maintain significant deposits of the metal, and quests for gold have been the impetus of countless expeditions and discoveries [for more gold news and analysis subscribe to our free newsletter].

The price of the metal is widely followed by many investors, both sophisticated and simplistic. There are a number of different options for investing in gold, including buying up coins and bars of the product, exchange-traded futures contracts, stocks of companies engaged in the extraction and sale of the metal, and both physically-backed and futures-based exchange-traded products.

Physical Properties And Uses Of Gold

Gold metal is dense and soft, and is one of the most malleable and ductile of the pure metals. Those features, along with a resistance to corrosion, make gold useful in applications such as dentistry and electronics. Gold often appears naturally as part of a solid solution that is part gold and part silver–usually more than 90% gold. Gold can be found and mined in many forms, including flakes, grains, or larger nuggets [see also Platinum/Gold Ratio Suggests Economic Slowdown].

Mining for gold is only economically viable if the metal is found in certain concentrations. Thanks to significant appreciation of gold prices in recent years, deposits with gold occurrences as low as 0.5 parts per million may be worthwhile; a concentration of about 60 times that level is needed before gold becomes visible to the naked eye, meaning that gold that appears invisible can often be valuable.

Unlike many metals, demand for gold in industrial applications is minimal. About half of new gold mined is mixed with other concentrations of precious metals like copper, silver, and palladium, and are used as jewelry. Since the financial crisis and most recent rush, investments now account for a significant portion of demand as well. Thanks in part to the introduction of gold exchange-traded funds (ETFs) in recent years, demand for gold from individual investors has increased significantly [see also Company Spotlight: Barrick Gold Corporation (ABX)].

Central banks of dozens of countries around the world hold gold bullion as a store of value and guarantee to debt-holders  Gold is occasionally used in the settlement of international transactions. The largest holders of gold include: 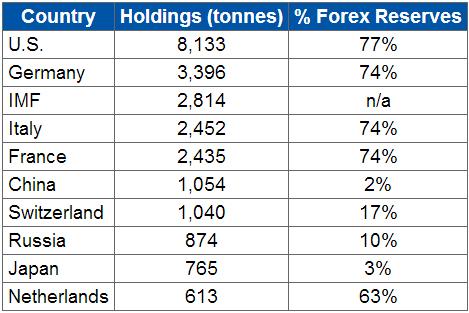 Other precious metals, such as silver and platinum, are used more widely in industrial applications such as automobile components. Because a significant portion of gold supply is used as an investment, the correlation between prices and the strength of the global economy may be considerably less than other metals (in certain environments, gold may be an effective equity market hedge).

Gold comes primarily from mining activity, with total global production approximating to 2,560 tons. South Africa has historically accounted for a significant portion of global gold supplies; in 1970 the country accounted for almost 80% of the world’s supply, though that percentage has declined to about 7% today. There has been a history of poor working conditions in South African mines, and as worker strikes become more frequent it seems that the nation will have to make some changes to increase production levels again.

In 2007 China accounted for more gold than South Africa, the first time in more than a century that the African country had not been the world’s largest supplier. The U.S. and Australia have also surpassed South Africa in terms of production in recent years. It is estimated that South Africa has produced about half of the gold ever mined, though the country now accounts for only about 11% of global reserves. Australia accounts for close to 15% of global reserves, illustrating the extent to which known gold deposits are spread around the globe. (all data below is in tons) 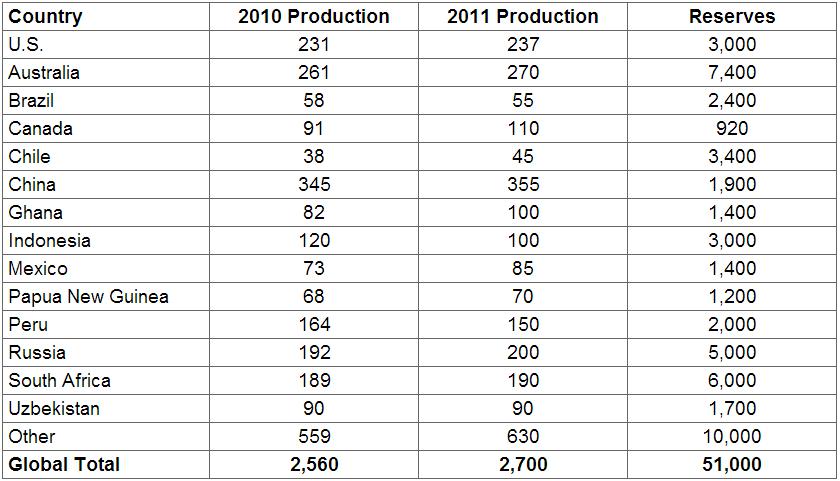 Unlike many investable assets, there are no cash flows associated with physical gold. And unlike many industrial and precious metals, there are few industrial applications for the metal either. As such, identifying the exact reasons for a move in gold prices can be tricky; the metal often reflects investor sentiment, and can respond to indications of inflation expectations, general economic health, and the strength of fiat currencies such as the U.S. dollar. Below, several of the primary price drivers of gold are highlighted:

Inflation: Gold often acts as an inflation hedge, with interest in the metal increasing when price increases show signs of accelerating.

New Discoveries: As with any metal, the supply of gold can have a significant impact on prices. The pace of new gold discoveries has slowed considerably in recent years, though there are still a number of firms globally engaged in searching for new deposits of the precious metal. To the extent that any major discoveries are made, prices could decline. If discoveries of the metal slow even further, upward pressure on prices could materialize.

Reserve Demands: Governments and central banks are major buyers of gold, and the behavior of these institutions can have a major impact on the price of the yellow metal. China in particular could have a major impact on global gold prices, since precious metals account for only a minor portion of foreign exchange reserves.

Investment Demand: From one perspective, demand for gold as an investment vehicle is a self-fulfilling prophecy. Because gold can be stored at a relatively low cost and held indefinitely, stronger investors interest in gold leads to higher prices for the metal. Assets in gold ETFs have skyrocketed in recent years, and the increased availability of these products has likely contributed to the rally in gold prices. To the extent that investment demand accelerates, upward pressure on gold prices could remain.

Gold has appeal as an investable asset for several reasons. It can serve as a safe haven, attracting assets when global equity markets show signs of instability. The yellow metal also has appeal as an inflation hedge or alternative to fiat currencies, positioning to potentially appreciate in a wide variety of environments [see also For Day Traders: The Most Liquid ETF for Every Commodity].

There are a variety of options for accessing gold, including futures, ETFs, and physical exposure:

Because gold maintains an extremely high value-to-weight ratio (a troy ounce is worth close to $1,500), it is possible and feasible for investors seeking exposure to simply buy gold coins or gold bullion. This strategy has the benefit of eliminating the nuances of a futures-based strategy, but may require secure storage arrangements. There is no shortage of dealers in gold coins, jewelry, and other forms of the metal.

As discussed in more detail below, there are also ETFs whose underlying assets consist of gold bullion. These funds offer exposure to spot prices while allowing for economies of scale that can minimize storage expenses.

Gold futures are traded on the COMEX, with contracts priced in dollars and cents per troy ounce (one troy ounce is equivalent to about 31 grams, and is equal to about 1.1 avoirdupois ounces). Trading in gold futures, which carry the product symbol “GC”, occurs on the CME Globex, CME ClearPort, and in Open Outcry trading in New York.

Investors can also obtain exposure to gold by purchasing stocks of companies that are engaged in extracting and selling precious metals. Like most companies, the profitability of gold miners depends on the prevailing market price for the products they sell. As such, mining companies tend to realize higher profits when natural resource prices are elevated—especially if significant portions of the cost structure are fixed in nature. Mining stocks tend to trade as a leveraged play on the underlying resource, meaning that the movements in price are often more significant than changes in the related commodity over the short term.

Many gold mining companies also are engaged in the extraction of other precious and industrial metals such as silver, platinum, and copper. However, because gold is significantly more valuable than silver and copper and more common than platinum, it will often account for the majority of revenue and earnings of mining companies. Major gold miners include:

There are multiple ETFs offering exposure to gold as well, including both funds that invest in gold futures contracts and funds that invest in physical gold bullion. While the returns generated by these funds will generally be similar—especially in the short term—over longer periods certain strategies may perform better depending on the slope of the futures curve. Gold ETFs include:

SPDR Gold Trust (NYSEARCA:GLD): This ETF invests in physical gold, meaning that it will reflect changes in spot prices of the commodity.

iShares Gold Trust (NYSEARCA:IAU): This ETF also invests in physical gold, and is cheaper than GLD in terms of expense ratio.

E-TRACS UBS Bloomberg CMCI Gold ETN (UBG): This product is an exchange-traded note, meaning that investors are exposed to the credit risk of the issuer.

Other gold exchange-traded products include:

RBS Gold Trendpilot Exchange Traded Notes (NYSEARCA:TBAR): This product oscillates between exposure to gold and cash depending on momentum factors and recent performance.

FactorShares 2X Gold Bull S&P500 Bear (NYSEARCA:FSG): This ETN offers leveraged exposure to the spread between gold and the S&P 500 on a daily basis.

There are also a number of ETFs that provide exposure to gold indirectly through investments in stocks of companies engaged in the discovery, extraction, and sale of the metal. These ETFs include:

Do You Buy In To The Precious Metals Rally?

Five Commodity ETFs Long Term Investors Should Run Away From

For Long Term Investors: The Cheapest ETF for Every Commodity

CU Vs. JJC: How They’ve Performed So Far In 2012
Monthly Newsletter Strategy
Download a free copy of our newsletter and see the details inside!
Hedge Fund Resource Center
Billionaire Hedge Funds