In April, I went out on a limb to suggest investors buy two particular small-cap stocks before they rebounded.

The first was InvenSense Inc (NYSE:INVN), a motion-sensor specialist that was trading around 45% off its 52-week-highs after a number of uninspiring earnings reports, and downgrades over the previous year. Even so, I noted, the company still maintained strong free cash flow, a flawless balance sheet, and was trading at just 13 times forward earnings estimates.

The second was robotic surgery up-and-comer MAKO Surgical Corp. (NASDAQ:MAKO), which had plummeted 74% below its own 52-week-high after the company twice missed earnings estimates, reducing system sales guidance each time. Still, I was sure the worst was over, and the best yet to come for MAKO Surgical Corp. (NASDAQ:MAKO) — if only they could just turn in a decent quarter to prove to investors they were still on the right track.

Sure enough, both companies did just that in May, and while MAKO’s report gave it a good start by meeting investors’ expectations, InvenSense Inc (NYSE:INVN) knocked it out of the ballpark by crushing analysts’ estimates. So far, anyway, both of those small-cap stocks have managed to outperform the S&P 500 since then: 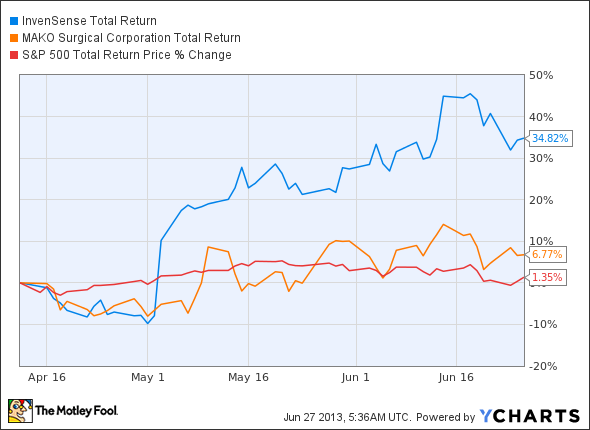 While I believe MAKO Surgical Corp. (NASDAQ:MAKO) and InvenSense Inc (NYSE:INVN) still have room to run, here are two more beaten-down small cap stocks that I think investors would be smart to buy before they revisit their previous highs:

Of solar and sapphire

First up, shares of GT Advanced Technologies Inc (NASDAQ:GTAT) stand 42% below their 52-week-high set last September, and that includes a 15% pop after analysts at Cannacord upgraded the stock on Thursday.

Even still, remember this company’s fall from grace actually extends even further to the peaks hit during the middle of 2011, from which it currently sits a staggering 75% lower.

So what happened? In short, the solar equipment specialist’s core photovoltaic (PV) furnace business went from boom to bust as the solar market crashed, and management has bluntly told frustrated investors that poor PV market conditions are expected to persist at least through sometime in 2014.

In the meantime, GTAT has been busy not only cutting slack from its bloated backlog, but also diversifying its operations by venturing into the sapphire market to rival, among other solutions, Corning Incorporated (NYSE:GLW)‘s popular Gorilla Glass product.

What’s more, as liquidity loosens with the gradually improving solar markets, GTAT’s innovative new HiCz equipment promises to give solar customers an edge by decreasing the cost, and increasing overall efficiency, of solar cells going forward. When signs even begin to show that’s happening, then GTAT could turn out to be one small-cap stock you certainly won’t regret buying now.

A leap of (educational) faith

Next, at 22% below their own 52-week high, the shares of educational toy-maker LeapFrog should prove another great small-cap stock to buy now.