MAKO Surgical Corp. (NASDAQ:MAKO) investors have to be feeling pretty good about themselves right about now. The stock has risen more than 23% so far this year, helped by an impressive 15% pop following its solid second-quarter earnings results in late July. 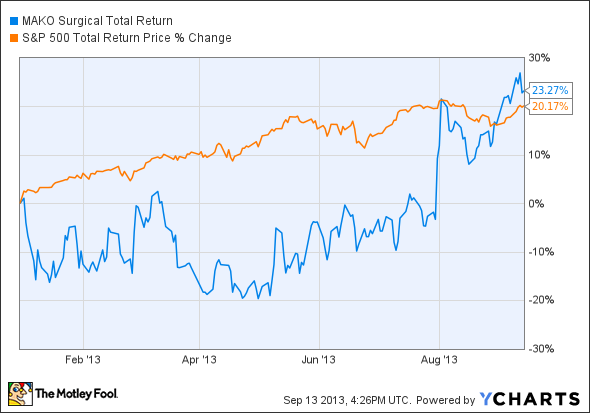 Of course, MAKO Surgical Corp. (NASDAQ:MAKO)’s rise seems a little less impressive when you consider it has only just barely outpaced the S&P 500’s 20% gain so far in 2013, but it sure beats last year’s dismal 49% drop, the result of two terrible earnings reports, spurred largely by lower-than-expected system sales.

As I wrote in July, however, it would seem the robotic surgery specialist is officially back on track after meeting analysts’ expectations en route to its ultimate long-term goal of achieving sustained profitability.

Since then, those in MAKO Surgical Corp. (NASDAQ:MAKO) management have been surprisingly quiet, instead opting to keep their heads low and focus on executing their plans.

Here’s what he said

Ferre started out by reiterating that the company is placing much of its focus on “execution in terms of creating better efficiencies,” which, in turn should drive greater system utilization. Incidentally, that’s something I suggested back in May could serve to drive huge returns for investors over the long run.

Potentially the most significant new bit of information, however, came a few minutes later, as Ferre touted the effectiveness of the company’s new Hip 2.1 application and said, “I am pleased to announce that almost 25% of our business right now is hip.”

And that, my fellow Fools, is a huge deal.

Remember, the number of total hip arthroplasty procedures last quarter grew 26% sequentially, and 106% year over year to 577. At the time, that represented only around 17.6% of the 3,274 overall procedures performed last quarter using MAKO Surgical Corp. (NASDAQ:MAKO)’s RIO Platform.

So let’s put together a quick guestimate for next quarter’s procedure count, shall we?

MAKO Surgical Corp. (NASDAQ:MAKO) management last quarter reiterated their existing 2013 guidance of 13,500 to 14,500 total procedures performed, and over the past three years company has seen an average of 24.4% of its yearly procedures performed in the third quarter. Last year, though, the third-quarter percentage was slightly lower at 23.65%, so let’s use that as a more conservative estimate going forward.

In theory, then, taking the midpoint of guidance gives us 14,000 total procedures in 2013, which means we should see approximately 3,311 procedures next quarter. That’d be a 1.1% sequential increase from last quarter’s number, and a 37.2% gain over the same three-month period last year, an acceleration over Q2’s 26% year-over-year procedure growth.

Meanwhile, taking 25% of that total yields around 828 hip procedures, or a more than 43% sequential increase over last quarter’s 577, once again showing accelerating growth.

Of course, these are just rough estimates, and this also assumes THA procedures were at 25% of the total for the entire third quarter, where in reality we’ll likely see a slightly lower hip number given the ramp up. But any way you slice the numbers, it’s apparent hip procedures’ influence is growing increasingly important to MAKO.

In fact, later in the Q&A portion of the conference, Ferre expressed renewed confidence the collective potential of MAKO’s partial knee and hip procedures should be able to grow their monthly per site utilization from current levels around seven cases per month to closer to 10 by the end of 2014 — a level he says represents “sustained profitability” for MAKO.