How do you pick the next stock to invest in? One way would be to spend hours of research browsing through thousands of publicly traded companies. However, an easier way is to look at the stocks that smart money investors are collectively bullish on. Hedge funds and other institutional investors usually invest large amounts of capital and have to conduct due diligence while choosing their next pick. They don’t always get it right, but, on average, their stock picks historically generated strong returns after adjusting for known risk factors. With this in mind, let’s take a look at the recent hedge fund activity surrounding International Business Machines Corporation (NYSE:IBM).

More and more hedge funds are losing faith in International Business Machines Corporation (NYSE:IBM). IBM shares hit a 3-year low during Q3 in terms of how many hedge funds own them, sliding to just 43 with long positions on September 30. That figure was slightly over 60 just a year-and-a-half earlier. With hedge fund ownership of IBM having fallen sharply in 2018, the stock has plummeted to the 159th most-owned holding among hedge funds, falling well short of our list of the 30 Most Popular Stocks Among Hedge Funds.

According to most market participants, hedge funds are seen as slow, old investment tools of the past. While there are more than 8,000 funds with their doors open at the moment, our researchers hone in on the crème de la crème of this group, around 700 funds. These money managers direct the lion’s share of all hedge funds’ total capital, and by observing their unrivaled stock picks, Insider Monkey has revealed several investment strategies that have historically defeated the market. Insider Monkey’s flagship hedge fund strategy defeated the S&P 500 index by 6 percentage points per annum since its inception in May 2014 through early November 2018. We were able to generate large returns even by identifying short candidates. Our portfolio of short stocks lost 26.1% since February 2017 even though the market was up nearly 19% during the same period. We just shared a list of 11 short targets in our latest quarterly update. 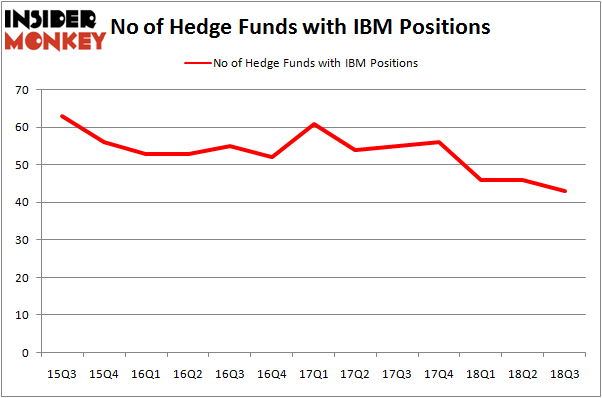 Seeing as International Business Machines Corporation (NYSE:IBM) has experienced a decline in interest from the aggregate hedge fund industry, it’s safe to say that there is a sect of fund managers who sold off their positions entirely last quarter. Interestingly, Israel Englander’s Millennium Management sold off the biggest stake of the 700 funds monitored by Insider Monkey, valued at close to $105.8 million in stock. Prem Watsa’s fund, Fairfax Financial Holdings, also dropped its stock, about $37.1 million worth. These moves are interesting, as aggregate hedge fund interest dropped by 3 funds last quarter.

As you can see these stocks had an average of 40 hedge funds with bullish positions and the average amount invested in these stocks was $1.98 billion. That figure was $1.54 billion in IBM’s case. Medtronic plc (NYSE:MDT) is the most popular stock in this table. On the other hand BHP Billiton Limited (NYSE:BHP) is the least popular one with only 19 bullish hedge fund positions. International Business Machines Corporation (NYSE:IBM) is not the most popular stock in this group but hedge fund interest is still above average. This is a slightly positive signal but we’d rather spend our time researching stocks that hedge funds are piling on, like MDT.